The 2012 presidential election in its last hours circled in around Ohio, and Virginia, two states that are virtual must-wins for Mitt Romney and which both presidential campaigns believe remain exceedingly close.

Amid hundreds of paths to victory for both candidates, it is these two states that earned special attention on Tuesday from the candidates. Mitt Romney, Paul Ryan, and Joe Biden all campaigned in the Cleveland, Ohio area on Tuesday, with the Republican ticket breaking off to stump in Virginia and Pennsylvania as well.

“I’m looking forward to the results. And I expect that we’ll have a good night,” Obama said on Tuesday morning during a stop at a Chicago office, where he congratulated Mitt Romney on a “spirited campaign.”

0
Speaking to reporters aboard his campaign plane on a final flight from Pennsylvania to Boston, Romney said "I just finished writing a victory speech. It’s about 1,118 words.” And he said he’s only written one speech.
The election has little in common with candidate Barack Obama’s triumphant sweep in 2008, and had more of the feel— in both hopeful campaigns — of 2004, a race that could have gone either way and that was decided by Ohio voters who preferred to stick with a flawed incumbent than to take a risk on a challenger. George W. Bush won the state that year by about 40,000 votes. Now Barack Obama is the incumbent arguing to stay the course, while Mitt Romney is arguing that the country needs a change. One change, though, could save Obama: The map has shifted, and now a more suburban, more diverse, and liberal Virginia is among the toss-up states.
0
Meanwhile, Republican hopes of retaking the Senate — which had burned bright at the beginning of 2012 — appeared to be slipping away Tuesday night, as two contests in competitive states slipped from the party's hands: Democrat Bill Nelson cruised to victory in Florida, while Independent Angus King, who is expected to caucus with Democrats, won the three-way Maine race. In Connecticut, Democrat Chris Murphy also won, defeating former wrestling executive Linda McMahon.
Exit polling released by the news organizations that sponsor it appeared to follow follows pre-election public polls, suggested that the economy is the most important issue for voters this cycle. What we will find out tonight is whether more voters credit Barack Obama for averting a depression, or are frustrated with the slow pace of recovery.
Romney’s narrow path to victory depends particularly on winning a substantial portion of the upper Midwest. If Ohio proves fruitless, Wisconsin and the right combination of other states may provide a win. Pennsylvania remains a fleeting hope for the Republican campaign, but both sides acknowledge polling in the state has tightened over the past week. 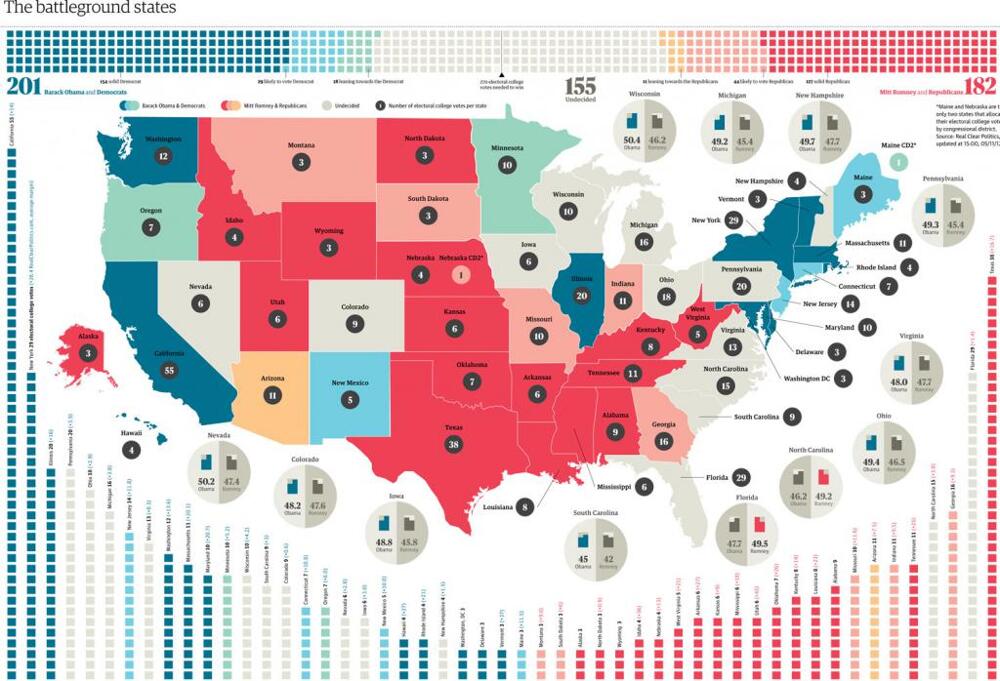 0
According to exit poll data from the Associated Press, 6 in 10 voters put the economy as the most important issue this year, with 4 in 10 saying it is getting better. Nearly half of voters blame George W. Bush for the economy over Obama.
And operatives on both campaigns Tuesday shared a consensus on some of the places to look Tuesday night.
Turnout in Virginia is expected to beat 2008 in a state Obama won by 6.3%, while Ohio officials suggest that they expect turnout to largely remain the same this year.
There is a bipartisan consensus that Nevada is safely in the Democratic column. Republicans point to Adams County in Colorado as a sign they are winning the state. And in Iowa, Romney insiders point to high turnout in the conservative Northwest of the state as a sign they will win.
Democrats believe high college turnout will help them hold onto Virginia, while Republicans note large turnout in coal country and the communities surrounding the state’s military-bases.
But for veterans of the bitter 2004 race, all eyes turned to Ohio. Republican were betting heavily on high turnout in coal country and the Cincinatti area, while Democrats believe that President Obama’s auto bailout will carry him to victory.