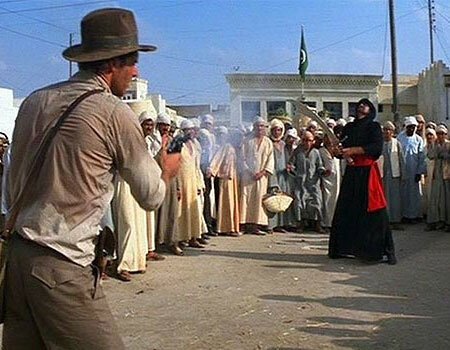 The Greatest Unscripted Movie Scenes of all Time

According to popular opinion, and based on evident internet trends on the internet, these are the best scenes that were never written from the most popular movies. 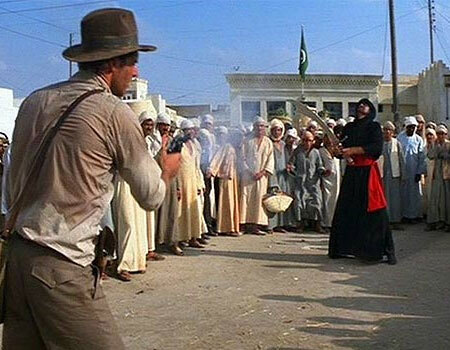 Scene: Gun Vs. Sword
In this scene Indiana Jones Chases Marion Ravenwood after being kidnapped. As Indy chases after him, he encounters a skilled swordsman who blocks his path. In the process of defeating this bad guy, Indy pulls out his gun and kills the man in one shot.
The original script called for a long sword fight but a day earlier Ford got a severe case of food poisoning and didn't have the energy to film the scene as written. After seeking alternative plans with Steven Spielberg, the scene was changed and became an iconic part of Indiana Jones mythos. 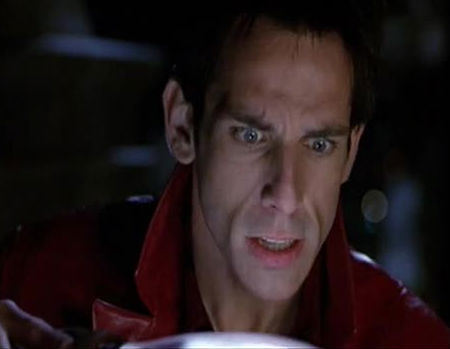 In this scene, J.P Prewitt explains to Zoolander how every high profile assassination in the political world was due to the fashion industry. An interesting conspiracy.
Zoolander asks, "Why male models?" Prewitt answers with a lengthy explanation, after which Zoolander responds again, "Why male models?" Stiller forgot his original line and just repeated his previous line instead. This prompted Duchovny to ad-lib his response "Are you kidding? I just told you like a minute ago.

This scene further solidifies Zoolander's character as a brainless model. 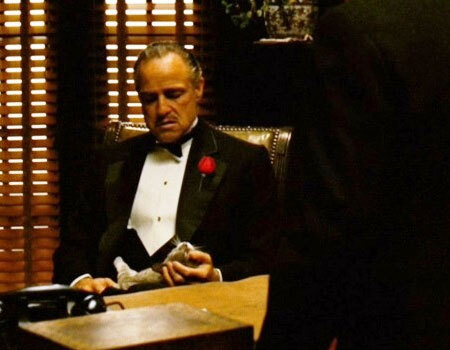 Vito Corleone (Marlon Brando)sentences a man to be beaten as retaliation for the beating of another man's daughter - all while gently stroking a cat. The cat was never part of the scene. There have been a couple different reports about this. Some sources say that Coppola placed the cat on Brando's lap, and another source says that Marlon Brando simply picked this cat up from the street and made him an offer he couldn't refuse. 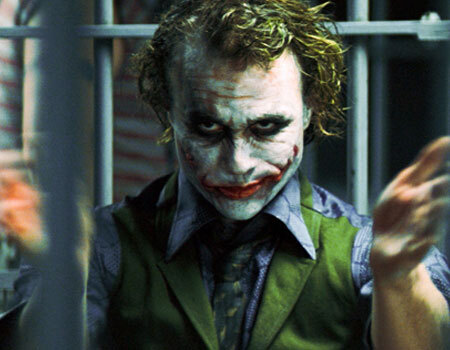 In this scene, Officer Gordon has just arrested the Joker. Mayor Garcia shows up to check out Gotham's latest catch and promotes Gordon to commissioner. As the officers in the room applaud the announcement Ledger begins, unscripted, to slowly clap - never changing his facial expression. It was just a simple improvisation but one that was unsettling and darkly brilliant. 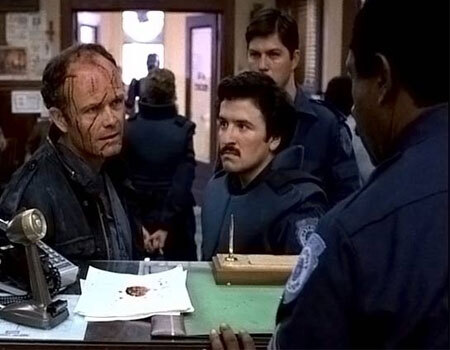 In the scene where Clarence Boddicker is arrested by Robocop and taken to the station, Boddicker spits a bloody glob onto the paperwork of the desk sergeant, followed by the line "Give me my f*ckin' phone call!"
This extra delight was never discussed and was evident by their real and disgusted surprise as the scene unfolded. 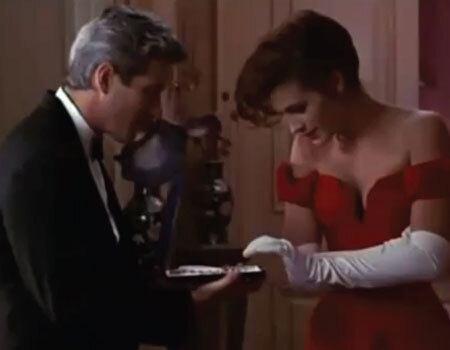 In one of the most famous scenes of the movie, Edward Lewis presents call girl Vivian Ward with a stunning diamond necklace. As she reaches out to touch the jewels, in an innocent playful, impromptu moment, Edward snaps the case shut. Vivian is genuinely surprised. Her laugh was so honest, and the scene so good, that Marshall decided to leave it in the film as is. 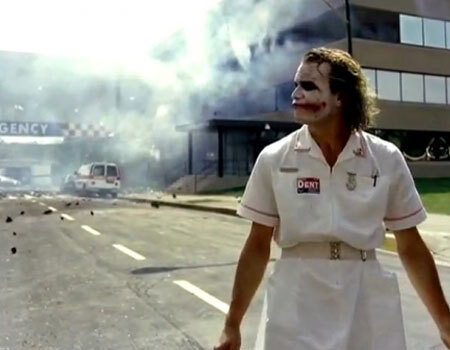 Originally, the Joker (Heath Ledger) was supposed to walk down the street while the explosion at the hospital began, get on the school bus during the scripted pause, and the bus would drive away while the explosion finished.
Instead, Joker paused, fidgeted with the remote in a very Joker-esque manner which brought this scene the perfect amount of Dark Humor. 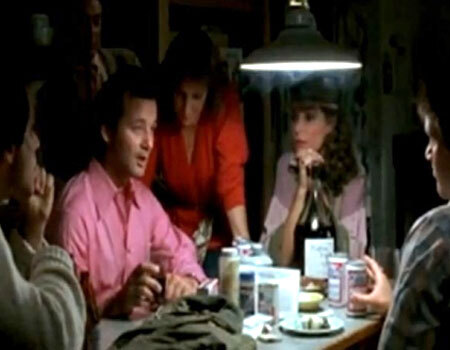 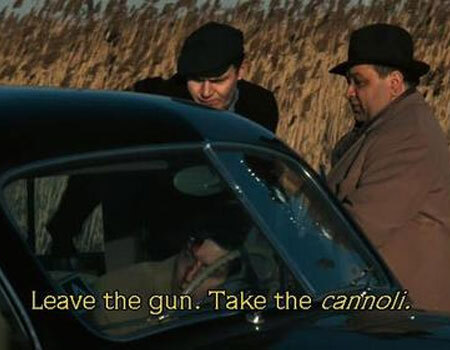 The Corleone family orders a hit on Paulie Gatto for his betrayal on Don Corleone, played by Marlon Brando.
Castellano's original line was "Leave the gun" but drawing from an earlier scene where Clemenza's wife reminds him to bring home some cannoli, he improvised the now famous line "Take the cannoli." 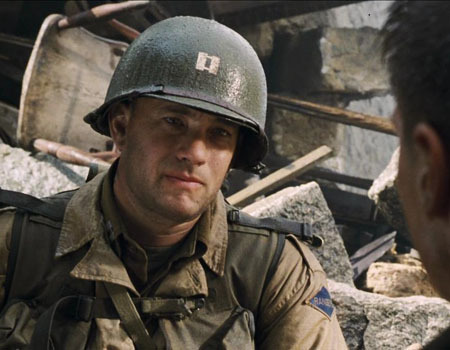 During a brief break from fighting, Captain Miller exchanges stories with Private Ryan. The story about Private Ryan's brothers and the barn...completely made up.
If you didn't believe Matt Damon was talented, now you have proof. 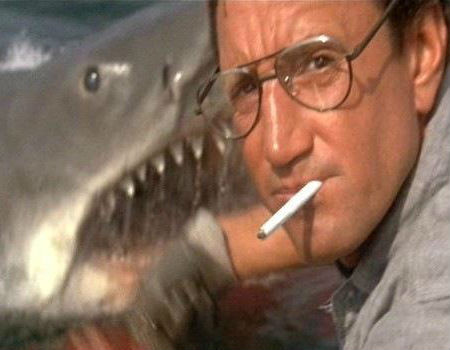 While chumming the waters in an attempt to lure the deadly great white shark within range, Police Chief Brody (Roy Scheider) gets his first look at exactly how massive the killer shark truly is.

Stunned, startled and filled with fear he stands up and utters the now famous line to Orca Captain Quint (Robert Shaw) completely off-script, "You're going to need a bigger boat.”

Turns out, he was right.