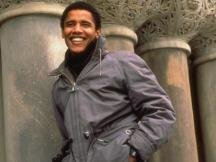 It's not Easy to be President (12 photo)

After just 4 years in office, but many more in politics, Barack Obama has been displaying all the classic signs of stress: his hair has become grayer than ever, the wrinkles above his brow are prominent, the plumpness of his cheeks has melted and become more like a set of flaps than a smile bump. It's tough tobe Barack, especially with a country as divided as ours about certin key issues regarding foreign policy (as we know not his strongest suit).