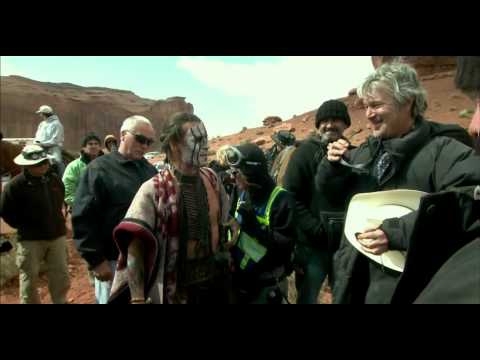 20 jun 2013 14:22
640
1
When actor/suspected chameleon Johnny Depp went on ‘The Late Show With David Letterman’ back in February to promote his film ‘The Lone Ranger,’ he told a harrowing tale of a near-death experience he had while riding his horse. Or rather, not riding his horse.
Now, thanks to a new featurette for the movie, “that time Johnny Depp was convinced he was going to die” is on video for public consumption. Way to be, Disney. (No, really, this was Disney’s idea.)

In the scene, you can see Johnny — in full-on Native American regalia — fall off his horse and then drop under the animal’s hooves, getting trampled in the process.
Ever the showman, Depp later reveals the hoof marks on his chest and then makes a joke about the whole experience, expressing how grateful he was that his coccyx made it through the encounter intact.
The horse, on the other hand, feels just awful about the whole thing, we’re sure.