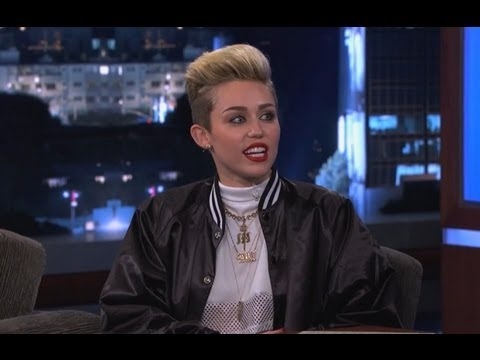 26 jun 2013 22:42
814
1
Miley Cyrus made Jimmy Kimmel very uncomfortable on his own talk show last night (June 25), arriving in high-waisted underwear, a crop top, a jacket and some thigh-high boots. As you do.
Then she talked about the “symbolism” in her music video ‘We Can’t Stop.’
SPOILER ALERT: It’s not really symbolism.

After some stilted conversation between the host and his guest, Kimmel asked about her bizarre music video and the twisted imagery used throughout.
Miley admitted that it was “based on true events” and a series of parties she’s thrown or attended, but that it’s also chock-full of symbolism too: While she just thought the french fry skull was cool, the taxidermied deer in sunglasses standing in front of several mirrors represents the kids. Even though it’s not a taxidermied baby goat. (What?)
“You know, it’s like you’re feeling judged and then here’s this scrawny deer that to me just seems so sweet, and he seems like he would be judged, and so this is him looking at himself in the reflection,” she said, making us wonder how much pot “salvia” she smoked before she got there.
“He’s got himself all swagged up, he’s trying to be something that he’s not, but he has to remember he can’t be judged.”
As for that Miley-on-doll action, she’s wearing a necklace that says “doll” and she’s making out with a doll-version of herself so therefore … metaphor? Also, the dude eating bread is “symbolic for money.” Or munchies. Or something.
And just in case you weren’t impressed by Miley (who has been trying way too hard to make fashion statements lately), check out the video below where she talks about her buddy Snoop Lion and find out why they get along. Hint: It doesn’t involve salvia.