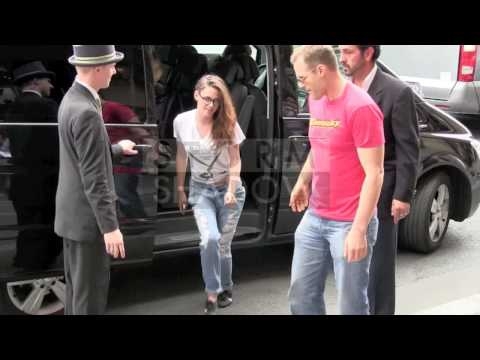 05 jul 2013 16:44
1064
1
Kristen Stewart spent her Fourth of July surrendering to Paris Fashion Week, but not to photographers.
Despite being at, well, Paris Fashion Week, the ‘Twilight’ starlet apparently didn’t understand that her purpose at the style mecca was to be photographed. As a result, she was caught on camera lashing out at paparazzi for no reason.
Stewart was snapped leaving Le Castiglione restaurant in Paris before going to her hotel, where she snapped back, but verbally: She griped that the paps were parasites, cockroaches and rats. (Maybe she’s still bitter about the whole “Rupert Sanders in the car” thing.)
As a result, the paps who recorded the above video made sure to note that When she left the hotel, she didn’t bother to take a second to sign autographs or pose with fans, opting instead to ignore them.
K-Stew has long had an adversarial relationship with paparazzi, comparing getting photographed to “rape” — and later apologizing for it. Still, it appears she still feels violated by camera flashes … even though, you know, that’s why she went to Fashion Week in the first place. That and to show off her pretty scowl in the front row.