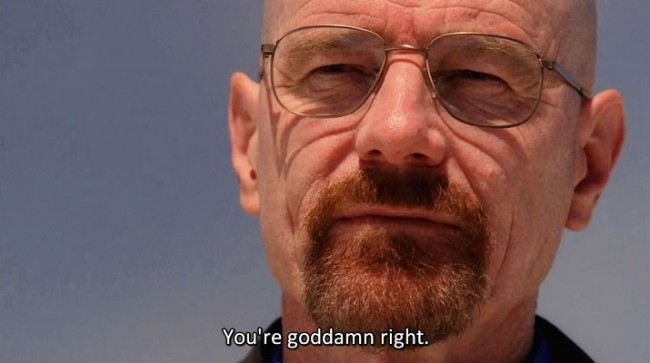 05 sep 2013 10:52
Tags: artistic  awesome  comedy  funny  funny-crazy-wtf-people  interesting  music  random  silly  weird
697
1
Walter White, he knows all about your operation, your “TV show.” His partners tell him that you’re producing a series that’s 70% great, if you’re lucky. What he stars on, Breaking Bad, is 99.1% masterpiece. “So?” you might be asking yourself. “So,” Walt responds, “it’s grade-school T-ball versus the New York Yankees, but, like, the good New York Yankees, not the current limping New York Yankees. They’re terrible. What I am is classic Coke.”
“Who the hell are you?” all other TV shows ask.
“You know exactly who I am. Say my show’s name.”
“Do what…? I don’t, I don’t have a damn clue who the hell you are.”
“Yeah, you do. I’m the star of the greatest TV show of all-time, according to Guinness World Records.”
“Bullsh*t. What about Homeboys in Outer Space?”
“SAY. MY. SHOW’S. NAME.”
“Breaking Bad.”
“You’re goddamn right.” 0
"AMC's "Breaking Bad" also makes an appearance in the 2014 edition of Guinness World Records as the “Highest-Rated TV Series,” earning a metascore of 99 out of 100 on MetaCritic.com, which aggregates reviews from leading critics." -- via Huffington post