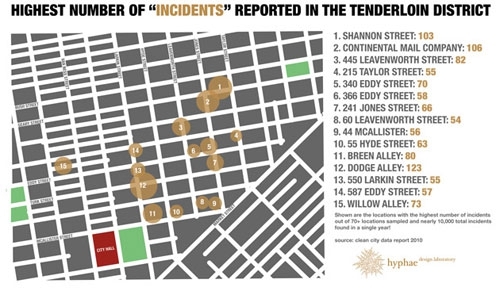 15 sep 2013 18:51
Tags: crackhead-stories   san-francisco-characters   tender-living   tenderloin   yelp-reviews
1304
2
San Francisco's central neighborhood, the Tenderloin, once describe Dave Chapel "there aint nothing tender about that loin", is home to many residential in and outside the building. Found on Yelp, a San Francisco, internet company is personal favorite Crack Head Stories. The converstation was "finished" a few years ago, but still are available to read on yelp.com.
Jason "Meatatarian!" B. says:
While waiting for the bus on market, a crackhead decided he needed to use the bathroom on the curb. He then proceeded to ask everyone around, "you gots toilet paper?"
Jewsyka V. says:
I think when I first moved to the TL and my friend and I were walking past a guy who was just babbling complete stream of consciousness insanity, and then we blipped into his radar and he suddenly asked, very philosophically, "what is the colors of the hairs on a beautiful vagina?" would be my favorite moment.

Chelsey G. says:
Well I work iin the TL so I have quite a few. One of my favorites is when I was walking to work feeling clean and professional and a babbling crackhead with a toilet plunger started screaming at me and comming at me pushing the toilet plunger at me. I managed to swifty get away with out being touched by the plunger. It was pretty great.

Vanessa "slipping into something more freudian" D. says:
not sure if the guy was a crackhead, but i was coming back from a friend's house party and i found this gross man just SLEEPING in the driver's seat in my car! he busted the window, but nothing was taken. it was the weirdest thing.

Eric "Paris Hilton" G. says:
Crackhead older guy on BART train quietly until he got to his stop at 12st oakland when he stood up proclaimed-
"So long everybody! I'm going to go snort some coke and stick my tongue up a prostitute's asshole. "
Several of us applauded, (after the doors were firmly shut). Oh I forgot the best part- Some young guy from the back of the train yelled back at the guy before he stepped off-
"Good luck with that!"

John "JP" P. says:
Walking down the street in the Haight, some guy, draggin a toaster by the cord behind him asking for change for his pet , "sparky".
Wendy X. says:
well, he was drunk, not on crack. I was eating at chabaa at about 12am ish. apparently this drunk guy thought the parking meter was his wife or something... started doing some pole dance w/ the parking meter while crying. a police car was passing by&he drops dead&falls "asleep" it was pretty hilarious, but kind of sad=[

Lib "go scratch" P. says:
not my favorite but most disgusting. Sitting in a bar in the mission on a sunny afternoon visiting my friend/bartender. A working gal with an obvious drug habit came in and asked if she could use the bathroom. She said it was an emergency. My friend said no, that there was a strict policy not to let non-paying ppl. in.
I actually argued w/ the bartender and said she looked distressed. But still a no go. Gal storms out, pulls down her pants and within seconds had explosive d. all over the front door area.
I felt bad for her.

Martin "What I gotta doooooo?" B. says:
I used to live across the street from a crack house and saw this lady crackhead walking around topless in the middle of the street in the pouring rain. This other dude would play frisbee with himself in the driveway between two parked cars. He had about 8 feet of space and would try to pop the frisbee up in the air on his fingers over and over again. Crazy people and never a dull moment. I really don't miss it at all
Harmonika S. says:
It's 7 am on a Winter morning, riding the 71 Haight to work in the upper Haight. 1989.
At Divisadero, a crack addict gets on the bus and drops his crack rock into the glass coin catcher, then proceeds to kick the shit out of the device, frightening the driver and just about everyone else OFF the bus ( I had to stay and watch) until he retrieved his precious rock. The police were called, the crackie ran away, and we all had to wait for another bus.
Barry "oneness is achieved by recognizing yourself" A. says:
Riding shotgun with a co-worker and we pull up to the light on the corner of 11th n Mission. Dude that is a spitting image of Clint Howard is leaning against the green City trash receptacle. Sitting on top that trash receptacle displayed proudly in the center is a capped jar of the jelly size/type. It appears to be filled with urine.
Me: "Ey man, that's a nice lookin' jar a piss ya got there"
Clint: *picking up jar and holding it up to his face in a slightly disturbing, potentially "throw ready" position* "I'M GOING TO THE DOCTOR!!!"
Co-worker and I: "Oh shit!"
The light turned green at the perfect time.
I almost got us piss-bombed.
Still funny. This was in '00. 0
Somethings are better when they are outdated information. Lets give a big warm brown thanks to the homeland security for shitting I mean shutting down most of the public restrooms across the United States. "For our Protection"
http://thetender.us/category/maps/