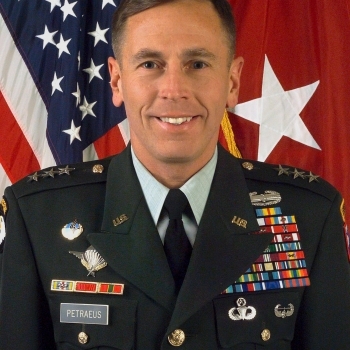 The Torrid Details
You've probably heard the details before, but here's a quick summary: Head of the CIA and respected retired general, David Petraeus, had an affair with his biographer, Paula Broadwell. Broadwell, having heard the advice that "If he cheats on his wife, he'll cheat on you," grew jealous of Petraeus's relationship with Tampa socialite Jill Kelley, and sent Kelley emails warning her to back off. Kelley asked her friend, FBI Agent Fred Humphries, to investigate the emails. His interest in the investigation was so intense that his supervisors pulled him off the case. During the FBI's investigation, flirtatious emails between Kelley and General John Allen were also uncovered.

The Aftermath
Frustrated with his supervisors' handling of the e-mail investigation, Humphries went to a Republican Congressman about the case, which led to all of the above information becoming public and embarrassment for pretty much everyone involved. Petraeus has resigned from the CIA. Broadwell has had her security clearance revoked and computers that had classified documents on them have been removed from her home. Allen has had his promotion put on hold. Kelley has called 911 and requested diplomatic protection (she was appointed an honorary consul by South Korea, which is now reviewing that appointment). And Agent Humphries, the man who made sure this would all be public knowledge, will forever be known as Shirtless FBI Agent. The Torrid Details
Allen Welsh Dulles is one of David Petraeus's predecessors as head of the CIA. Dulles was in charge from 1953 to 1961. Although overseeing the agency during the height of the Cold War must have kept him busy, Dulles still found the time to have scores of affairs. He probably even got together with Queen Frederika of Greece: on a 1958 visit to Washington, the queen visited Dulles's office. After they had been alone for an hour, an aide entered the office, but found it empty. The aide heard noises coming from an adjacent room, and soon witnessed the queen and Dulles emerge from said room.

The Aftermath
Although Dulles's affairs were common knowledge, and he even hooked up with a visiting head of state, there were zero repercussions for his career or his reputation. David Petraeus must go green with envy every time he thinks about this guy. The Torrid Details
Mata Hari, a Dutch national who had lived in the Dutch East Indies, gained fame as an exotic dancer in France at the beginning of the 20th century. She was also a skilled courtesan who had multiple affairs and benefactors. Her travels through Europe and numerous liaisons attracted attention from British and French intelligence officials. When they learned she had accepted money from a German officer, she was accused of spying for the Germans during World War I.

The Aftermath
Mata Hari was executed by firing squad in France in 1917. Later investigation showed that the French had no actual evidence of her passing secrets to the Germans. Instead, Mata Hari may have been used as a scapegoat to cover others' intelligence leaks. The Torrid Details
Won Jeong-hwa is a North Korean woman who, in 2001, said she had escaped from North Korea's oppressive regime. After marrying and then divorcing a South Korean businessman, she had affairs with multiple army officers in South Korea, from whom she gathered information to pass back to North Korea. If you're wondering how Won managed to seduce multiple officers, one source speculates that female spies from North Korea undergo years of sex training, developing their skills in brothels and learning tricks like inserting drug-filled diaphragms to further enthrall their partners.

The Aftermath
Although North Korea denied Won was a spy, she was sentenced in South Korea to five years in prison for espionage in 2008. The Torrid Details
While working in China in 1964, 20-year-old French diplomat Bernard Boursicot was seduced by a Chinese national. The affair continued for years, and Boursicot later passed along secrets to Chinese officials because he believed he had to in order to keep his lover safe. However, although Boursicot believed his lover was a woman, he was in fact involved with a male Peking Opera star, Shi Pei Pu. Boursicot even thought that Shi had given birth to his child (in fact, Shi had purchased a baby on the black market).

The Aftermath
After Boursicot returned to France, he managed to bring Shi and "their" child to the country as well. Boursicot and Shi were arrested in 1983, which was when a stunned Boursicot learned that Shi was, in fact, a man. They were both convicted of espionage in 1986. The episode inspired a movie and Broadway play, M. Butterfly. Sadly, it did not inspire better sex education around the world, even though if the young Boursicot had had a clue about female body parts, the whole mess might have been avoided in the first place. The Torrid Details
Colombian prostitute Dania Londono is just one of the hookers that United States Secret Service Agents picked up on a trip to Colombia in April of 2012 (during which they were supposed to be preparing for the President's upcoming visit to the country). Approximately ten agents arranged for girls from brothels to attend a sex party at their Cartagena hotel. When one agent didn't want to pay what Londono thought her services were worth ($800), she got upset enough to attract the attention of the police, and the world.

The Aftermath
Several agents were either suspended or chose to resign. And from now on, Secret Service trips are going to be a lot less fun. However, on the plus side, working girls around the world may find it easier to get paid full price for their services. After all, if that one agent hadn't been such a cheapskate, we never would have learned about all of these torrid details. The Torrid Details
John Profumo was the Secretary of State for War in U.K. Prime Minister Harold Macmillan's Cabinet when he had an extramarital affair with Christine Keeler. The affair lasted for a few weeks; unfortunately for Profumo, Keeler was also involved with Yevgeny Ivanov, the Soviet attache in London and a rumored spy. When word of the affair leaked out after one of Keeler's boyfriends fired a gun at her door in 1962, Profumo was caught in the spotlight.

The Aftermath
Although there was no indication that Profumo had passed on any classified information to Keeler, he resigned from his Cabinet position and from Parliament. Ivanov was called home to the Soviet Union. Keeler benefited the most from the notoriety, posing nude for a well-known photographic portrait. The Torrid Details
Elizabeth Masamune was an Australian trade official with years of experience and the security clearance to know that Anh Ngoc Luong was suspected of working for Vietnamese intelligence. Neither of those things stopped her from sleeping with Luong, nor from encouraging an Australian bank to bribe Luong to do business with him. Luong stands accused of getting $AU20 million in bribes.

The Aftermath
This scandal, like the Petraeus affair, is currently unfolding and being investigated. Presumably Luong wishes he had been a little less greedy, so as not to get caught. And though she has insisted that her job duties were not compromised by her relationship with Luong, Masamune probably regrets proving that men are not the only ones who sometimes think with an organ other than their brains. The Torrid Details
Mordechai Vanunu, an Israeli scientist, revealed details about Israel's heretofore secret nuclear program to London newspapers in 1986. Desperate to hold him accountable for sharing this information, Israel used one of Vanunu's vulnerabilities against him: Vanunu was desperate for sex. Israel sent a Mossad agent who had been born in America, Cheryl Hanin, to meet up with Vanunu in London. Hanin (cover name "Cindy") then convinced Vanunu to go to Rome with her. There Israeli agents were able to drug Vanunu and transport him back to Israel.

The Aftermath
Vanunu was convicted in a closed trial and sentenced 18 years in prison, eleven of which he served in solitary confinement. He was released from prison in 2004 but is still kept under close watch by Israeli authorities. The Torrid Details
Born in China, Katrina Leung emigrated to the United States in 1970. In the 1980s, she was recruited as an FBI asset (code name “Parlor Maid”) to give the bureau information about China’s military capabilities. Almost as soon as she started working for the FBI, Leung began an affair with her handler, James J. Smith, that lasted for nearly 20 years. Whenever Smith visited Leung or stayed over at her house, Leung would photocopy classified documents Smith was carrying and then pass them on to China. Leung also had an affair with another agent, William Cleveland Jr. Although the FBI began to suspect Leung in the 1990s, Smith only admitted the affair after the FBI recorded him having sex with Leung in a hotel room.

The Aftermath
Leung was charged with taking classified documents, but the case against her blew up when the prosecutors were accused of misconduct. Smith agreed to a plea bargain and accepted responsibility for lying to the FBI about the affair. Cleveland had already left the FBI when Leung’s actions were finally discovered.