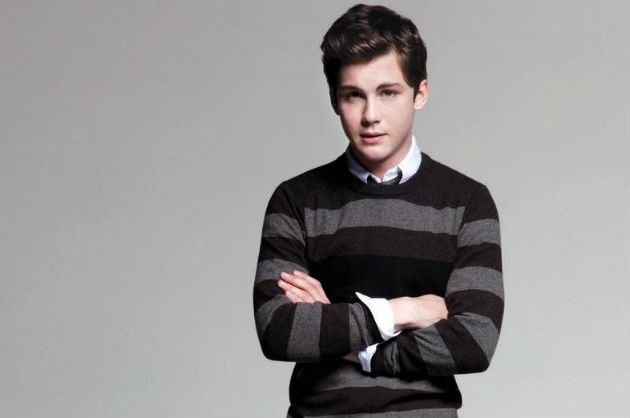 You probably recognize Logan Lerman from a ton of movies — the young actor is a rising star, and is finally starting to be taken seriously thanks to his role in last year’s ‘The Perks of Being a Wallflower,’ in which he played depressed protagonist Charlie, whose new school friends help save his life.
Makes you want to grab the tissues already, right?
He’s also the star of the ‘Percy Jackson’ movies, based on the young adult novels, which are like Harry Potter, but with Greek mythology. The newest film, ‘Percy Jackson and the Sea of Monsters,’ hits theaters this August.
Lerman got his start as a kid acting with Mel Gibson in both ‘The Patriot’ and ‘What Women Want,’ and has appeared in films like ‘Gamer,’ ‘The Three Musketeers,’ and the upcoming epic ‘Noah,’ from acclaimed director Darren Aronofsky.
In his downtime, Lerman plays music (piano, guitar), and toys around for fun in a band with his former ‘Jack and Bobby’ co-star Dean Collins. Lerman says his band isn’t serious, but he does have one serious aspiration: to be the head of a movie studio someday.
We’re good with that. Have you seen the dudes in charge of making movies? They could use a hot guy like Lerman around to improve the scenery. 0
Wendy Moss 5 years prev
Logan Lerman is a Jew, which the racist writing this post will never tell you.

Andrew Garfield and Aaron Taylor-Johnson are Jewish, too (though I don’t know if both of their parents are).

Oh, and Ansel Elgort’s father is Jewish, though I don’t know how Ansel was raised. Robert Downey, Jr. and Sean Penn were also born to Jewish fathers and non-Jewish mothers. Armie Hammer and Chris Pine are part Jewish.

Actors with one Jewish-born parent and one parent who converted to Judaism: Dianna Agron, Sara Paxton (whose father converted, not her mother), Alicia Silverstone, Jamie-Lynn Sigler.
0
Reply  •  Link  •  Report this  •
Share ›
Show all
Show more (from _)