15 sep 2013 14:31
Tags: Mininmum bill wages for the best?   california   cost-of-living   mininmum-wage
1175
3
California, rush to the gold is the states nation highest minimum wage at $10 an hour. Fazed in the next 3 years, California's Legislature passed the bill last Thursday, signed by Gov. Jerry Brown calling it, "an overdue piece of legislation that would help working-class families." The last raise was over 6 years ago to its previous $8 minimum. Concerns of the bill effect: Will the cost for the employer be to much for affording an employee? aka "job killer". Over the previous years personal experience in San Francisco, California; I would say no. More likely to happen and seen is a full time employee at 40 hours cut down to 30 or even 20 hours, eliminating the cost of insurance for employers and hiring a second "cheaper" part-time employee. I being a college educated part-time employee and not a member of Congress. Cities like San Francisco has its minimum wage at $10.50. While the new bill is razing minimum wage it is not set for inflation, at the same time, San Francisco Area prices went up 0.5 percent over the past two months and 2.6 percent from a year ago, according to Bureau of Labor Statistics Consumer Price Index. "The federal minimum provides $15,080 a year assuming a 40-hour work week, which is $50 below the federal poverty line for a family of two. More than 15 million workers nationally earn the national minimum, which compares to the median national salary of $40,350, according to the U.S. Bureau of Labor Statistics." President Barack Obama has "sought" to increase the federal minimum wage from &7.25 to $9 an hour. Below are some graphs to show Consumer Price Index of San Francisco, as well as, Prices graph of what our wages can afford. 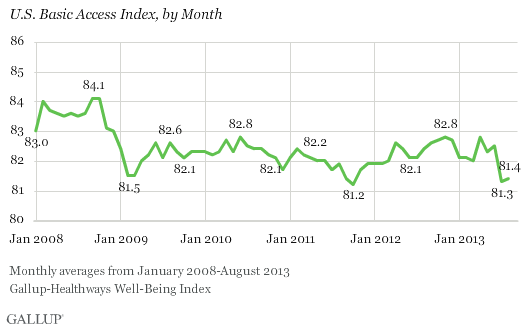 0
According to an August 2013 Wall Street Journal analysis of Labor Department data, "the average hourly pay for a nongovernment, non-supervisory worker, adjusted for price increases, declined to $8.77 [in July 2013] from $8.85 at the end of the recession in June 2009." Sum up is that while we are actually being paid more, we can afford less.
http://www.gallup.com/poll/164363/americans-struggle-afford-food.aspx#1 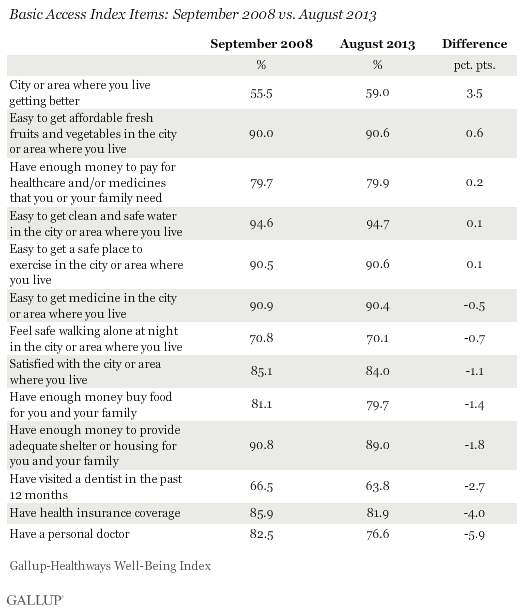 0
About the Gallup-Healthways Well-Being Index

The Gallup-Healthways Well-Being Index tracks "well being" in the U.S. and provides best-in-class solutions for a healthier world. To learn more, please visit well-beingindex.com.