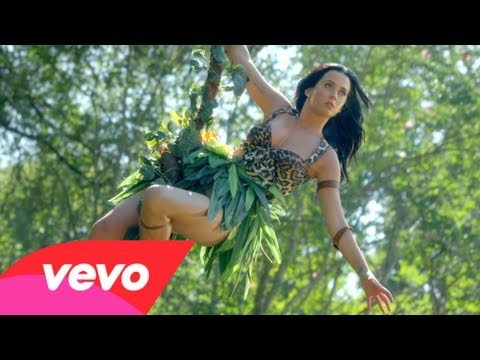 PETA Is Angry at Katy Perry for 'Roar' Music Video

16 sep 2013 13:37
Tags: awesome   cool   creative   intense   interesting   popular   review   shows   symbolism   trending   tv
5283
1
Katy Perry‘s new music video for her single ‘Roar’ is a jungle adventure featuring big cats, elephants and monkeys, and it has angered the animal rights organization PETA.
What puzzles us? Perry’s hard to believe ability to turn plants into a fashionable skirt. Or the fact that the video, which is about roaring like a lion, features zero lions. Or her forcing wild animals to follow strict human guidelines, not to mention her use of electronics and puns in the middle of the wilderness.
In a statement by PETA spokesperson Merrilee Burke about their problem with the video, she explained, “Animals used for entertainment endure horrific cruelty and suffer from extreme confinement and violent training methods. They often become stressed and anxious when hauled around and forced into unfamiliar or frightening situations.”
“The Serengeti Ranch, the animal exhibitor that we believe supplied the animals for the Roar video, has been inspected by the US Department of Agriculture 22 times since 2001,” she added.
All very valid concerns, though they come across as a tad suspicious when you consider that the talk is being aimed at a high profile celebrity. Katy and her team have yet to respond to the comments.