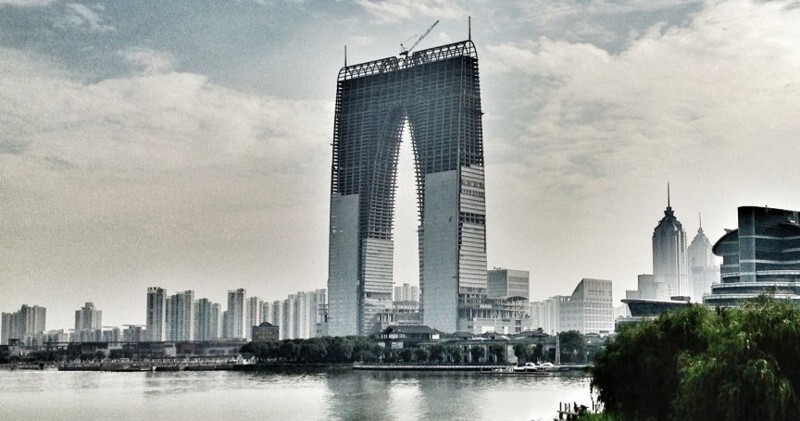 16 sep 2015 13:00
Tags: body   building   part
91
11
With so many nations exploding economically over the last two or three decades, people keep running out of ideas for what to build. Like every profession, there are two types of architects. Those that play it safe and re-hash the same old design with a small twist, and those creative geniuses that take the chances required to build something fresh and magnificent. Unfortunately the geniuses sometimes get too creative, providing internet fodder for the rest of us that can sit back and mock their designs. Inadvertently some of these designs end up looking, well, like human body parts. 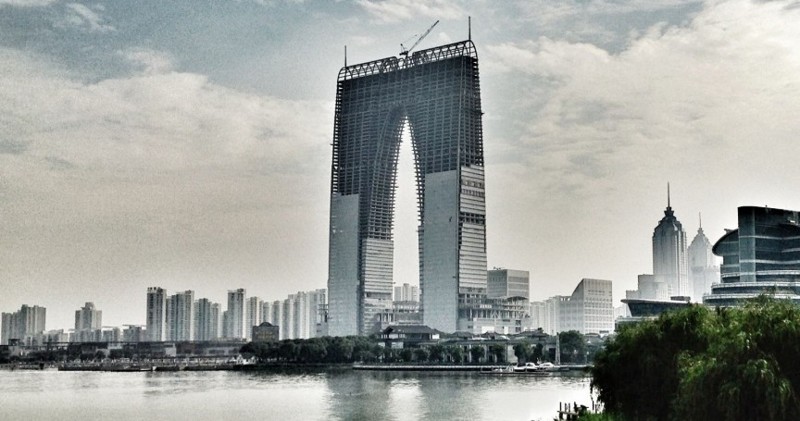 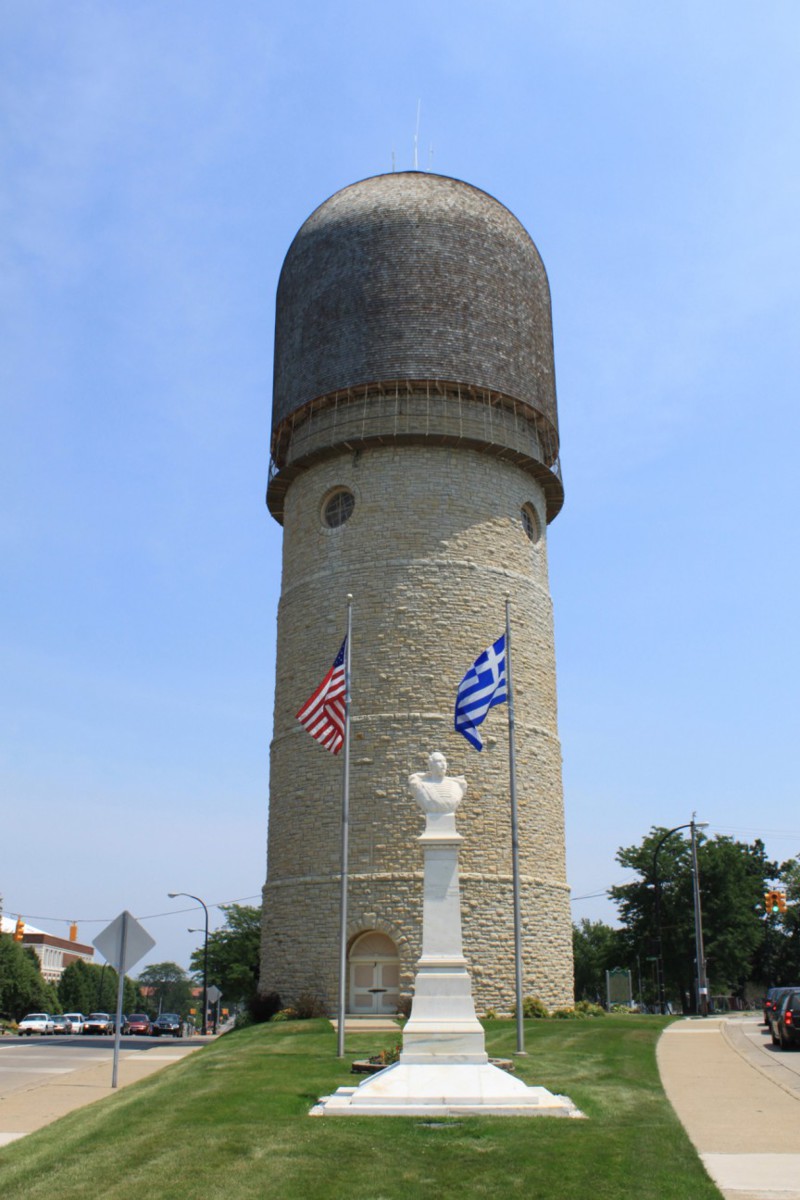 0
For some reason, the phallic shape is probably the most common shape around for tall buildings, outside of the rectangle or the oval. It’s never intentional, but it just goes to show where the human mind ends up way too often, even subconsciously. Every town can claim a penis shaped building. So why is this one so special? In a contest by Cabinet Magazine, it was named the most ‘Phallic Building In The World’ beating out thousands of competitors from around the world. I guess that’s something the small town of Ypsilanti can be proud of. Locals have even given the tower a name, the “brick dick”. The 147 ft. tall Tower was erected (pardon the pun) in 1889. The tower has even earned a long standing urban legend which holds that the tower will crumble if a virgin ever graduates from nearby Eastern Michigan University. In 1975, this tower was designated by the American Water Works Association as an American Water Landmark. It was restored in 1976. 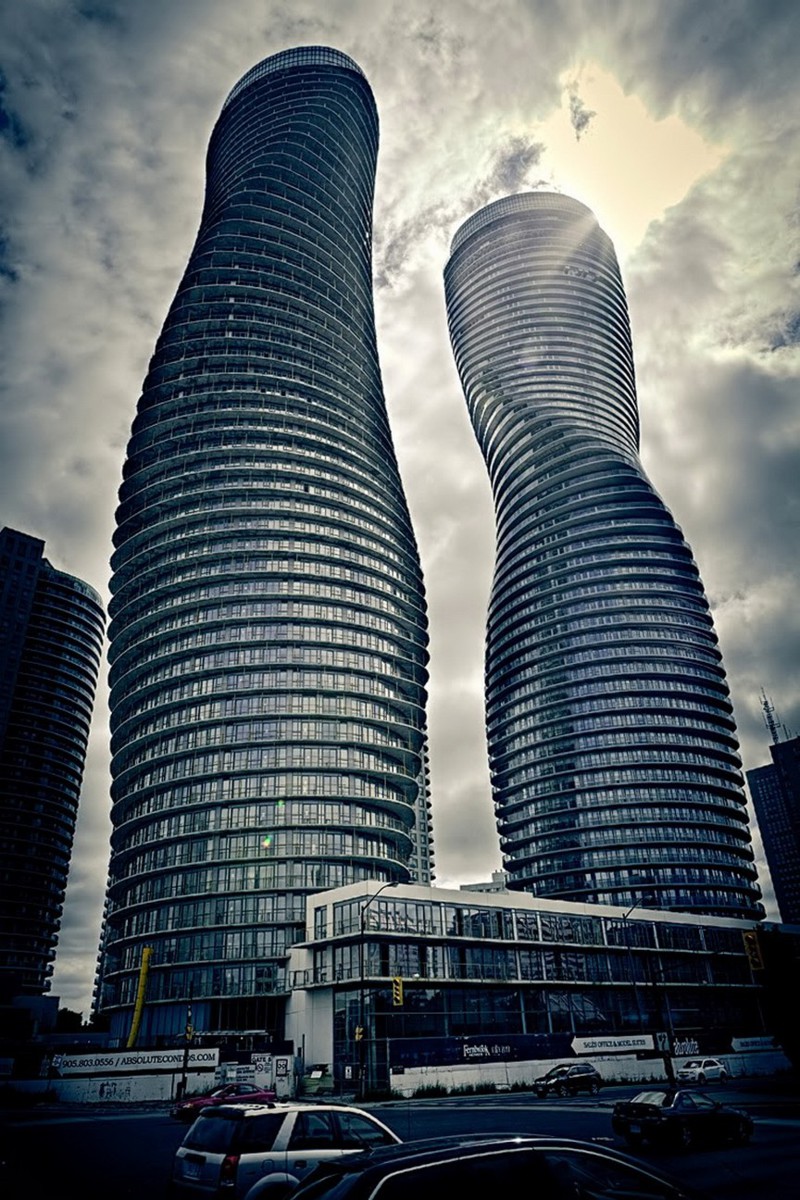 0
We are now progressing to buildings that look like entire bodies. These residential towers, some 50 and 56 stories high, are situated in a Toronto, Canada suburb. They were named the ‘Best Tall Building in the Americas for 2012‘ by the CTBUH (Council on Tall Buildings and Urban Habitat). They are officially called the Absolute Towers, but locals gave it the more colorful name, the Marilyn Monroe building, in honor of the former movie star’s famous buxom shape. Their undulating shape is the design of young Beijing-based architect, Ma Yansong, and his firm, MAD Architects. You will notice later on that half of the buildings on this list involve China, as China has earned a penchant for creative and sometimes out of this world crazy, buildings. Eventually three more buildings will be constructed on this site. I wonder what they’ll look like. 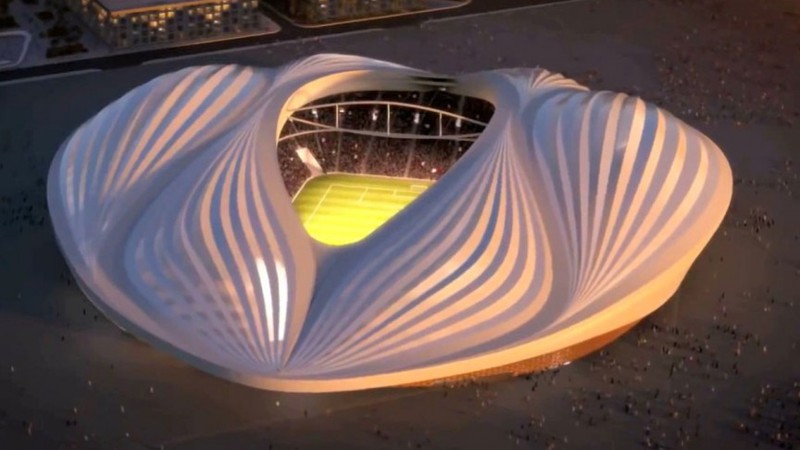 0
Appropriately, we include the second most common human body part found in buildings, the vagina. This building didn’t win a contest like the “brick dick” mentioned before, but search the internet for buildings shaped like a vagina and this one appears all the time, as such it is certified by google search as being number one. When the architect, Zaha Hadid, released the design a few years back, headlines that sounded like a chorus of giggling Beavis and Butt-Heads all agreed: Qatar’s World Cup 2022 Stadium Looks Like A Vagina. AECOM, the firm handling the construction, said that the stadium was inspired by “the dhow boat that carried generations of local fishermen and pearl divers.” They insist its resemblance to genitalia was accidental, but was it really? Like so many other gender inequalities, the world has more Penis Shaped buildings than Vagina shaped buildings, but just look at many modern stadiums, airports etc.. and you’ll agree that this is about to change. 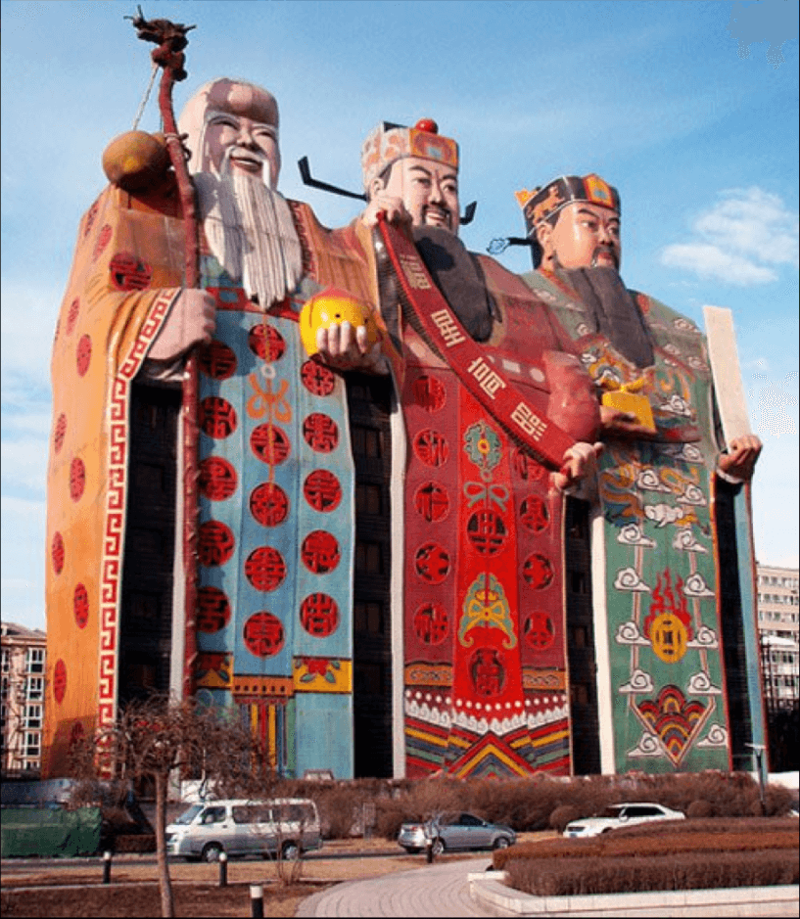 0
China has a history of carving enormous Buddhas into mountainsides. One hotel owner took that tradition a few steps further, erecting a vast trio of habitable gods in the middle of Hebei province, east of Beijing. The 10 story building shows three deities, Fu, Lu and Shou, the Gods of good fortune, longevity and prosperity. Shou, the gentleman with the white beard, welcomes guests through a door in his right foot, while in his right hand, he holds the Peach of Immortality – which houses the best suite in the hotel. Immediately after its construction it held the Guinness World Record for the World’s Biggest Image Building. All the windows of the hotel seem to be hidden behind the patterns of dresses. There are two entrances – on the right and on the left. I wonder what the hotel’s description is on Expedia or Travelocity. Alas none could be found. 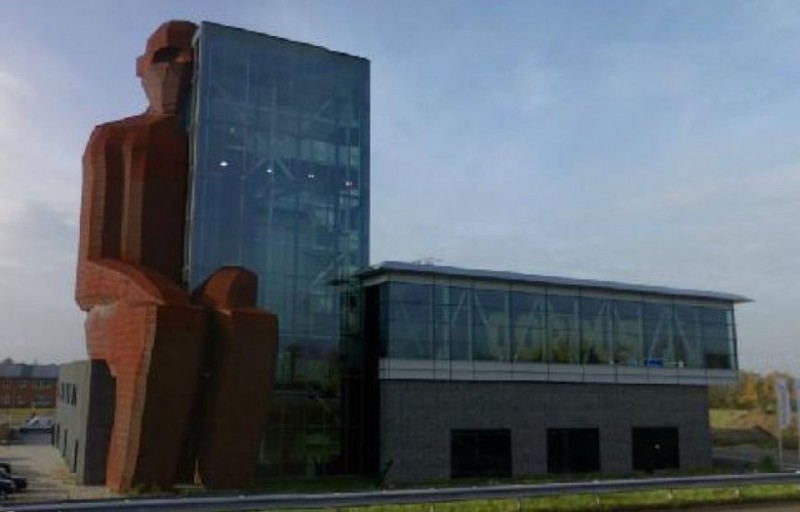 0
Not to be outdone, Europe has some funky architecture as well. This museum in the Netherlands is dedicated to Human Biology. The human body theme continues even once you open the door located through the man’s legs. As you go up the escalator, the museum opens into a giant sore located on a man’s knee. Kids can even jump up and down on the body’s tongue which doubles as a trampoline. Wonder what kind of exhibits such a museum offers? How about live cheese digestion and holograms of egg fertilization. What kind of kid doesn’t want to see that kind of gooey mess on their off days?

5. Funny Faces, Located Throughout The World 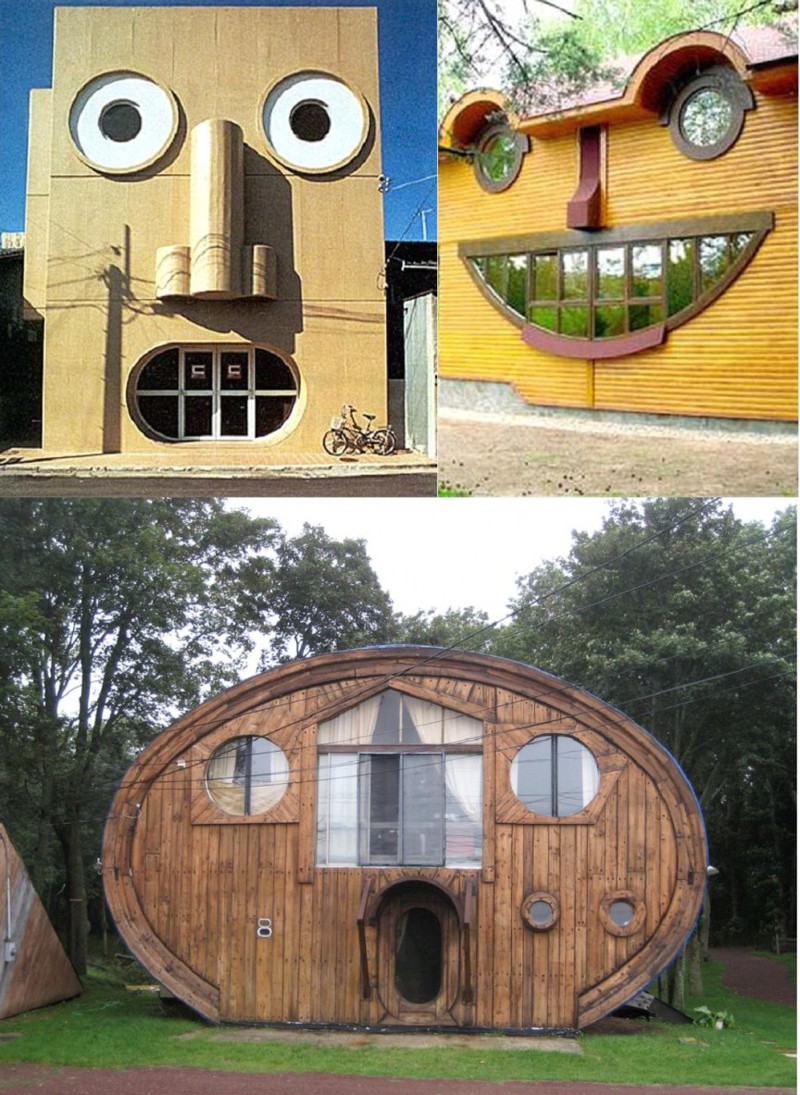 0
I can’t tell you exactly where these buildings are, but they sure make you smile when you look at them. I don’t know if the faces were really intentional, but notice how the mood changes depending on the location of the doors and windows. One looks like a log cabin on what appears to be a campground. The other just looks like a regular home, while the top one to the left looks like a store front. 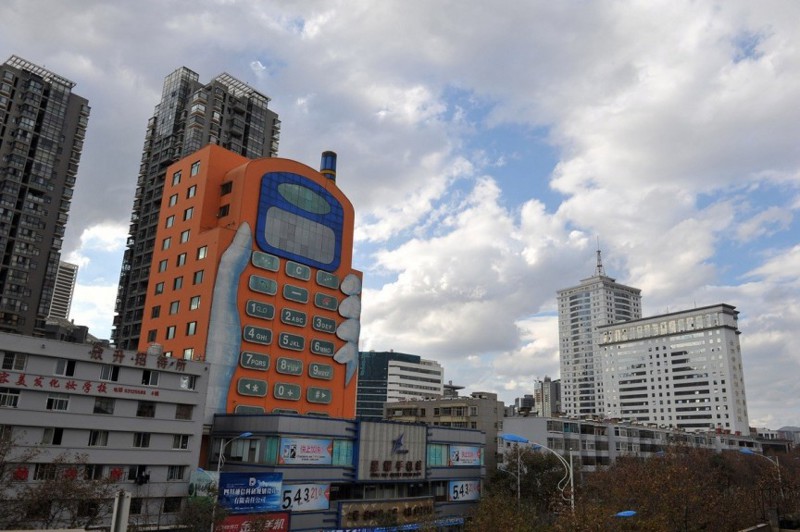 0
Located in southern China’s Yunnan province, rising above Huancheng Road in the provincial capital Kunming, is the 11-story mobile phone building featuring button-shaped windows and a penthouse office floor that looks out through the screen. A blue hand (hence the body part) appears to be holding the phone. Normally this type of ‘art work’ appears as a mural or street art. Not here, though. It’s actually part of the building and constructed out of brick. This city of 6 million people is known as ‘the City of Eternal Spring’ for its pleasant climate and flowers that bloom all year long. It’s also the most popular tourist destination in Southwest China. 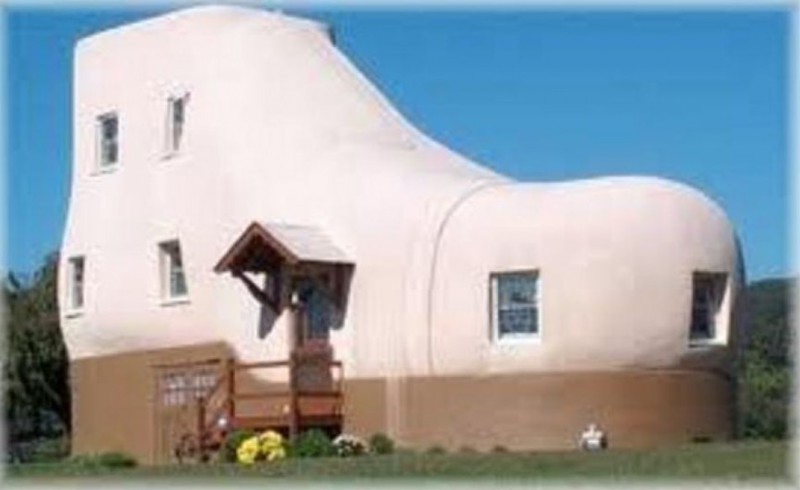 0
Built in 1948 by shoe maven Mahlon N. Haines, the Shoe House has become a must see road trip stop in Pennsylvania. Not initially designed as a road side attraction, but as an advertisement for his company, promoting the claim that the company raised boots “hoof-to-hoof” because the company’s boot making process started by raising the cattle. The 5 story house was originally the shoe maven’s house, then it became a rental property until it became a tourist attraction in recent years. There are shoe houses all over the world, but someone actually lived in this one.

2. The Pair Of Pants, Gate Of The Orient Building, Suzhou, China 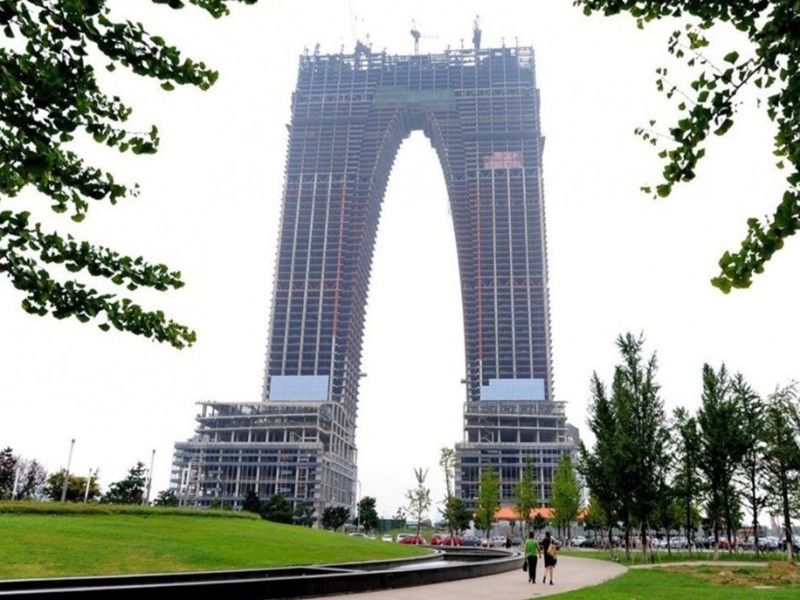 0
Local bystanders raged that “It’s just a big pair of pants!”, once the legs were joined together by what appears to be a crotch in 2012. The 74 story office tower has been declared the largest gateway building in the world and perhaps it should also take the record for the world’s largest pair of pants. The building even has feet. Designed by British firm RMJM, the building has been declared “humiliating” by some locals, who say walking through its gaping arch is “like being forced to crawl between someone else’s legs.” Buildings like this angered the Chinese government so much, that earlier this year, they banned eccentric construction projects such as this one. It’s too bad. 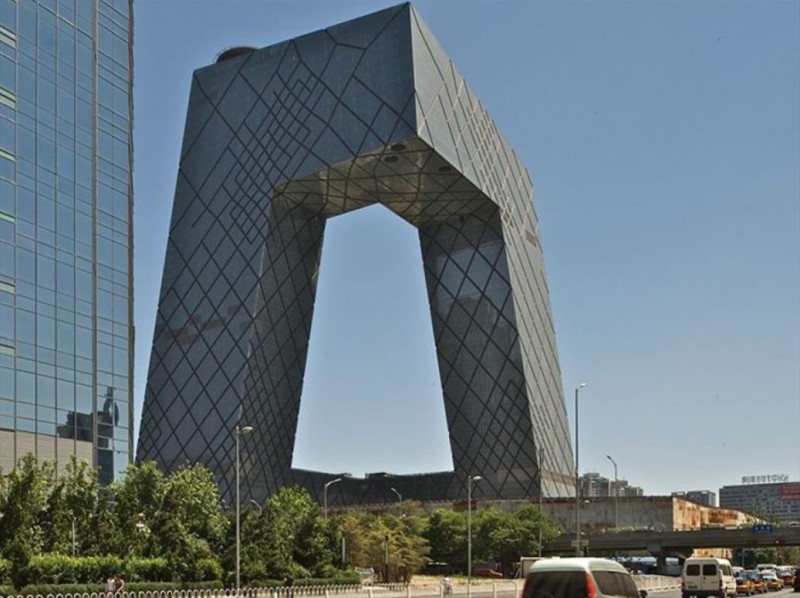 0
While we’re on the topic of legs, check out this building that looks like someone bending over. If I were the local government, I’d be wary of placing a skyscraper in plain view of the opening between the legs, and I’d also avoid using brown colored bricks on any building visible from this angle, as well. The building is the home of China Central Television, a strange design statement for the country’s central news agency. Designed by Dutch practice OMA, it has been nicknamed the “big boxer shorts”. People in China love the building, as it has already been copied several times in other Chinese cities. The 768 ft. tall building also won an award, the 2013 ‘Best Tall Building Worldwide’ from the Council on Tall Buildings and Urban Habitat. What were the judges thinking? 17 Clever Buildings Whose Architects Refused To Cut Down Local Trees Easy Stretches You Can Do To Improve Your Body
We need to be sure you are not a bot. Type the characters you see in the picture below.
Обновить