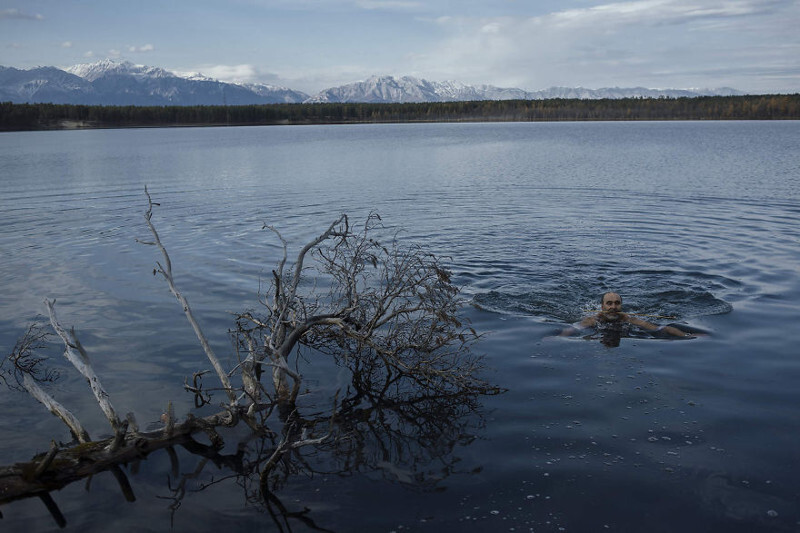 24 dec 2015 10:15
Tags: life   paypal   russia
45
26
1
Russia is the biggest country in the world. When most people think of it, what comes to mind is the Kremlin, colorful domed churches, and maybe some snow and bears. This unusual advertising campaign challenges those typical views, showing sides of Russia not often seen even by Russians themselves. PayPal went and visited five of their customers who live in far-off places, creating an amazingly beautiful project documenting the lives of ordinary Russians.

Baikal is the world’s largest freshwater lake. Gennady Khorunzhy lives about four hours drive from it, far in the mountains of Buryatia

In fact he lives so far away that it takes more than a day to get to his village – Novy Uoyan – from any major city. He likes it that way, saying that the nature there is still untouched and the water is still clean enough to drink

Gennady, 63 years old, leads a surprisingly active lifestyle. He enjoys dancing, archery, boating, and many other sports. His favorite is cycling

There are no other dancers in his village – his former dancing partner now feels too old to dance – and he has to practice alone. That’s the only downside he can name of living this far away from civilization

His son taught him how to use the internet. Both Gennady and his wife now actively use Skype to communicate with the rest of the world. He also frequently buys stuff for his hobbies online – he can’t get anything where he lives

Gennady says that his personal motto is to never stop. He wants to keep learning and doing something new – and as long as he does it he does not feel his age

He has a small house, a garden and some farm animals. He says that he feels independent now – he can supply all the food he needs for himself and his family

Alexander’s hobby is woodcutting with a fretsaw. He first saw this craft as a young man and was fascinated by it – the cut wood looked like a delicate lace

Alexander runs a small online store where he sells his own fretsaw patterns. His customers include foreigners – and many contact him directly, so he has made a lot of friends among the hobbyists

One day the craftsman whose works had many years ago inspired him to take up this hobby had contacted him through the website. They are now friends

Alexander often gets asked whether he’d like to leave his farm and go back to the city. He says he never thinks about that – he’s just too happy to live where he does

Diana lives on the island of Sakhalin that is right next to Japan. She came here all the way from Kiev and at first was shocked – she remembers thinking that there is nothing but nature on the island, no life at all

She used to be a lawyer, but one day decided to quit her job to follow her true passion – jewelry making. She remembers feeling confident – she liked making jewelry, she was good at it and felt that she would be able to earn a living that way

Diana loves collecting stones for her craft. Some of the most exotic ones she orders from places such as South Africa. Her workshop is filled with thousands of stones from all around the world

Three years later Diana has clients from all over the world – from Russia to US and South Korea. She no longer feels isolated on Sakhalin

Diana sells her jewelry through her Instagram, because she feels that there she offers more than just goods – she offers people her lifestyle. She travels around Sakhalin a lot, because it makes her feel inspired

Roman Kozhakov is a young man with a rather unusual hobby for his village of Yablonevsky in Republic of Adygeya. He spends his free time restoring a vintage Ford Capri 1969

Roman, a classic car fan, wanted his first car to be special. It was impossible to find the Ford Capri in its original state in Russia, so he decided to build his own from scratch

He orders parts from Britain (that’s were the Ford was assembled back in the 60s) and has friends help out with the car. He didn’t know anything about repairing cars beforehand, so YouTube was a big help

To fund the restoration, Roman works as a photo editor. He says that to buy the car seats, he once had to edit 40 000 pictures of sofas for a local furniture store. His dream is to finish his car and drive it around the mountains nearby

In Russia’s northern coast, Dalnye Zelentsy village is practically abandoned, but there is a military base nearby and people still live there. It’s also sometimes visited by tourists and divers – the views are just too amazing there

Sergey Valchenko is a military man who lives in this village. He is stationed there with his family

It’s 45 kilometers to the nearest village with a store and a post office, and the closest bank is four hours away. But they do have an internet connection

His family’s favorite pastime is sport. Sergey ordered stuff for their small gym online and now both he and his wife spend a lot time there. They plan to introduce their son to the healthy lifestyle as he gets older

Sergey says that he likes living in Zelentsy. His personal belief is that man should live as close as possible to nature. He says he does not feel disconnected from anything – it’s the people in the cities who are disconnected from the natural state 76 y.o. “Babushka of Baikal” Lives Alone In Siberia And Skates Across Baikal Every Day 10+ Beauty Queens On The Catwalk Vs Real Life