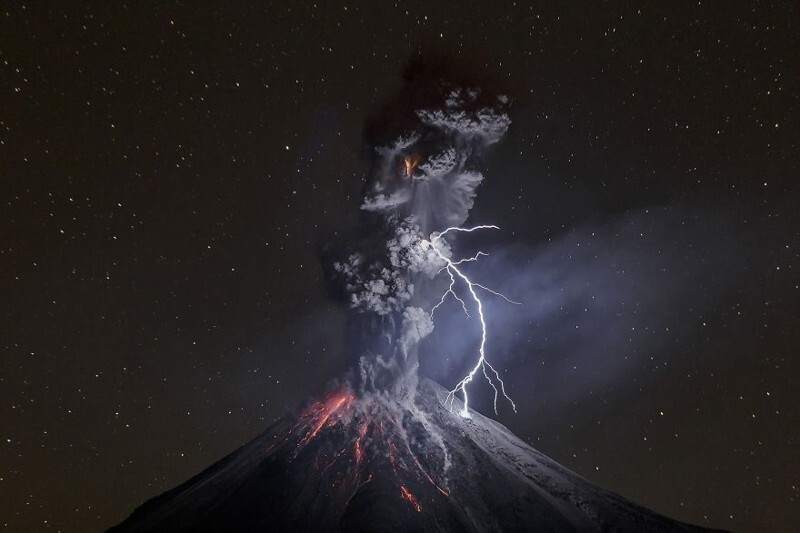 04 aug 2017 12:47
Tags: contest   national-geographic   photo   travel   winner   wonder   world
300
21
The votes for the National Geographic 2017 Travel Photographer of the Year contest are in and it's time to announce the winners. This annual competition highlights the diversity of our planet through its natural wonders and inhabitants, and the winning shots are just as awe-inspiring as last year. 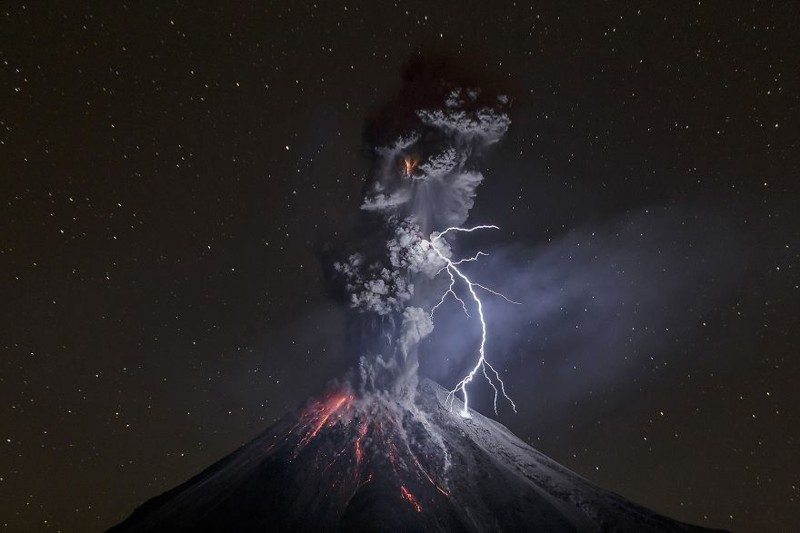 Смотреть все фото в галерее
A powerful eruption illuminates the slopes of Mexico’s Colima Volcano on December 13, 2015. I was in the town of Comala when I suddenly saw incandescence above the volcano's crater and started shooting. Seconds later, a powerful volcanic explosion expelled a cloud of ash particles and a massive lightning bolt illuminated most of the dark scene. It was one of the most exciting moments of my life. 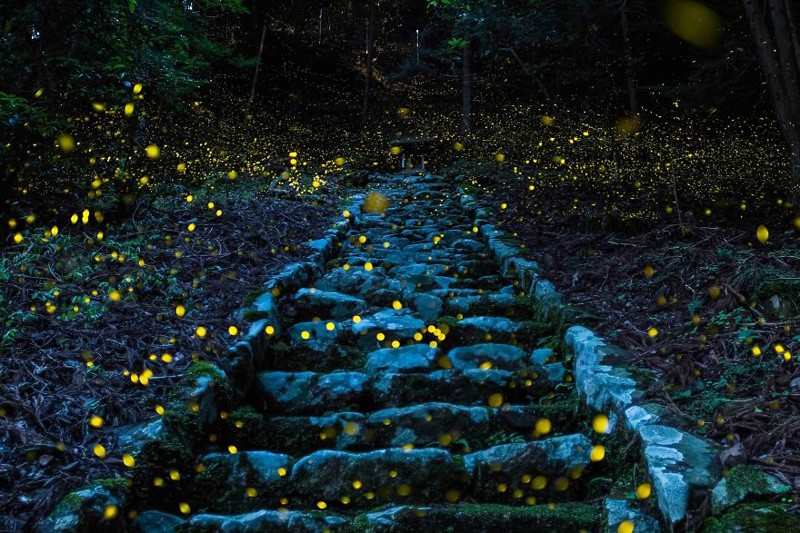 In a remote village in the Tamba region of Japan, twinkling fireflies light up the Forest of the Gods on a summer evening. The fireflies carpet a stairway leading to a small shrine revered by the local people, creating a magical atmosphere. 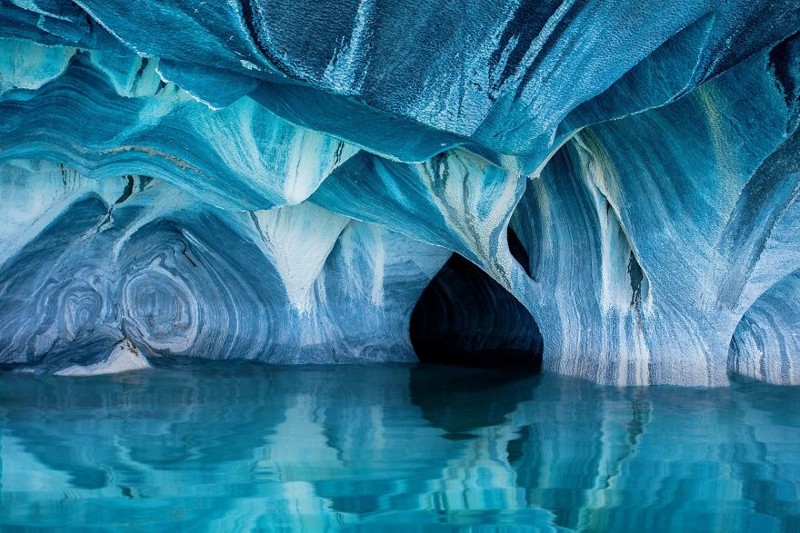 My dad and I traveled to Patagonia earlier this year, and we wanted to see something off the beaten path. After a 10-hour drive and traversing a long, dirt trail, we finally came upon the marble caves. We chartered a boat to take us closer, and I waited for the perfect light to capture these intricate blue swirls. The extra effort it took to reach the caves was worth it. 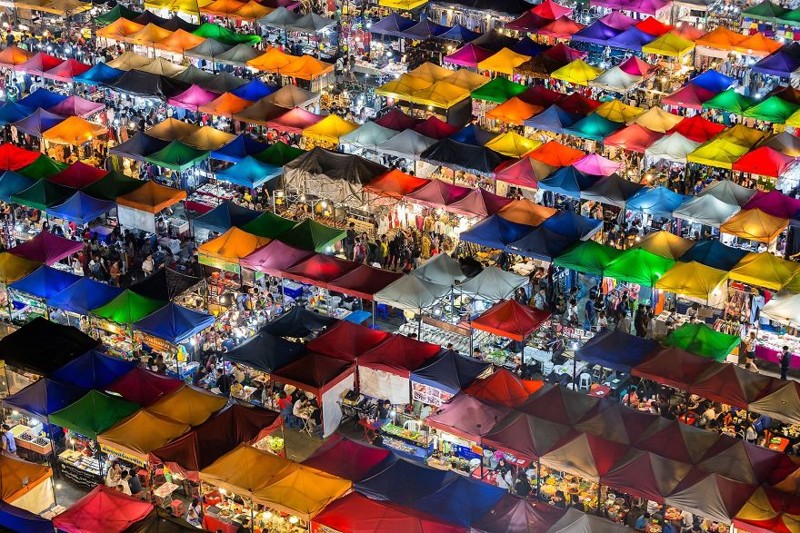 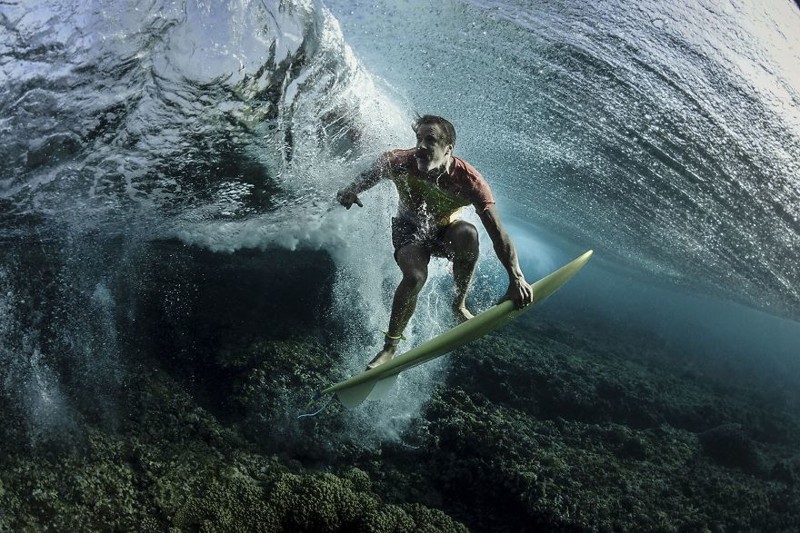 I recently traveled to Tavarua, Fiji, with professional surfer Donavon Frankenreiter and captured this image at Cloudbreak. The usual surf shots have all been done, so we decided to get creative and looked for new angles and perspectives. 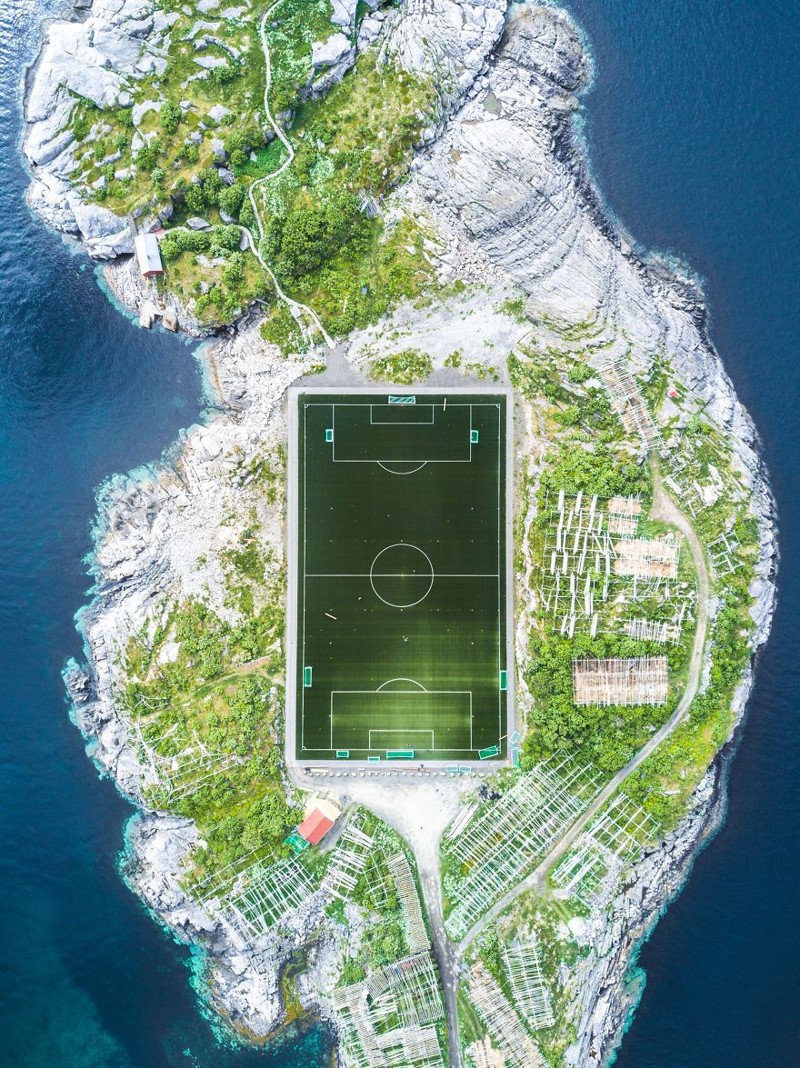 In Norway’s Lofoten Islands, the Henningsvær football field is considered one of the most amazing in Europe. This photo was taken during a sailing trip from Tromsø to the Lofoten Archipelago. After a week of cold and rainy weather, the sky finally cleared up enough to fly my drone. We were absolutely astonished to learn that the entire football field is heated, so after lying down and soaking in the... Read More 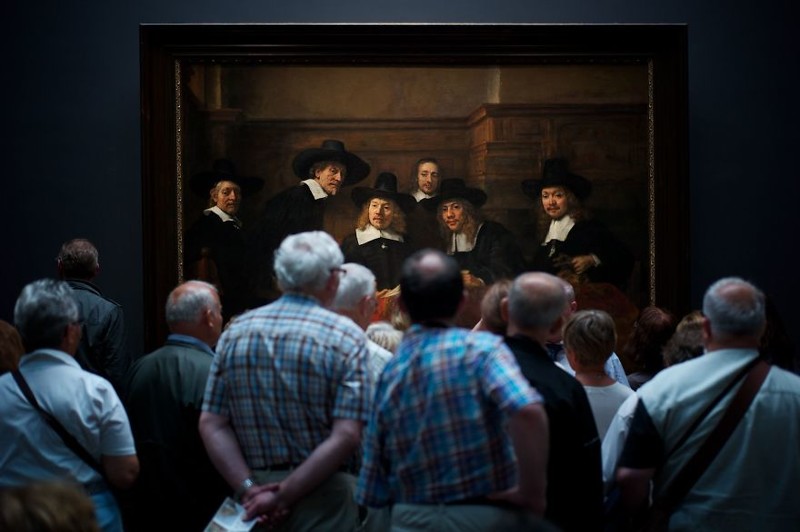 A crowd of spectators stands in front of Rembrandt’s masterpiece, Syndics of the Drapers’ Guild, at Rijksmuseum in Amsterdam. As I observed the scene I laughed when I realized that the people in the painting also appear to be curiously watching the visitors. I managed to take two shots before the audience moved away—one is out of focus, but this one was perfect. 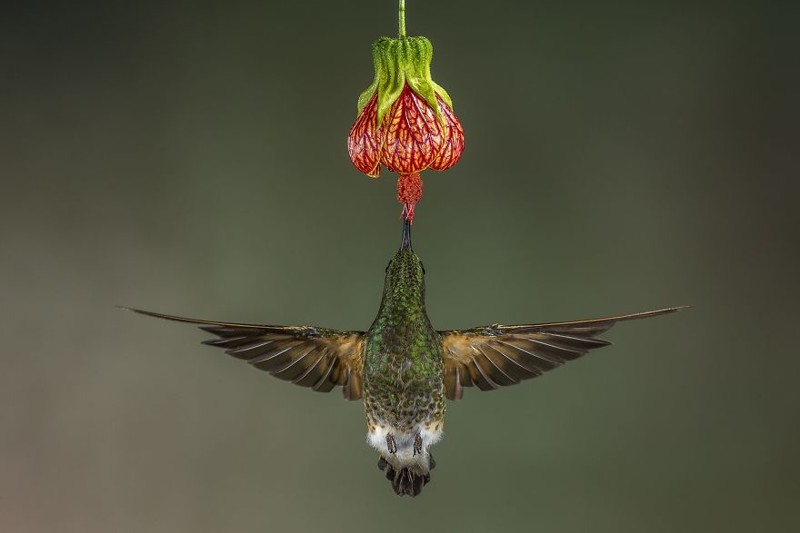 A buff-tailed coronet feeds on flower nectar in the Ecuadorian forest, a paradise for hummingbirds. 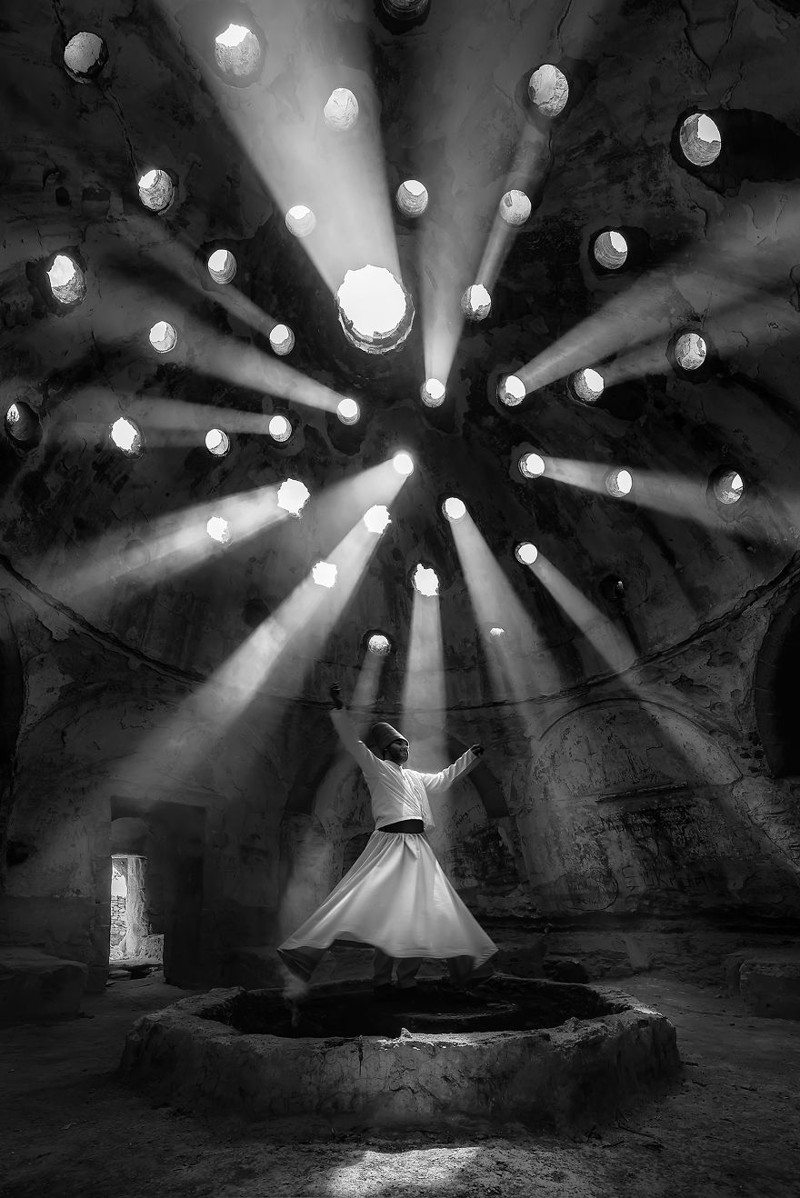 Beams of light filter through a historic building in Konya, Turkey, where a whirling dervish performs an ecstatic dance. The ceremony represents a mystical journey of man's spiritual ascent towards truth and love, and represents the constant revolution of all living things. For example, the Earth itself is in a state of rotation as well as the atoms that make up everything on it. 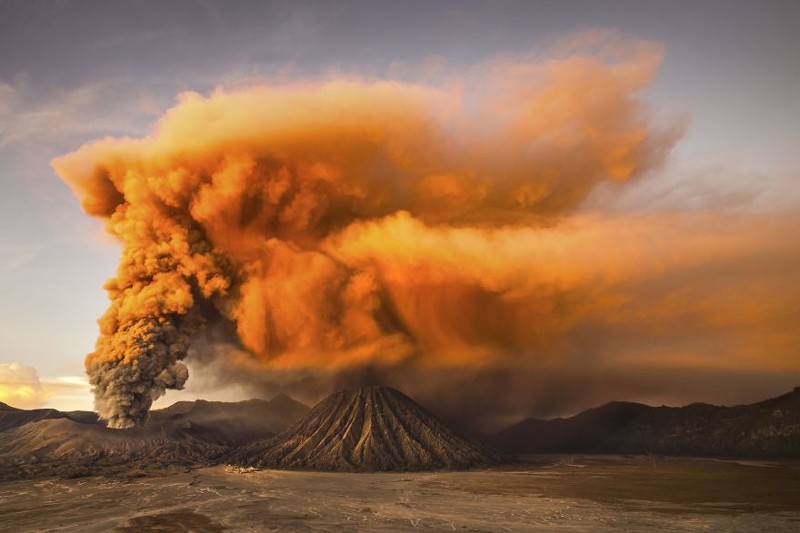 Mount Bromo is a small but active volcano on East Java, Indonesia. On January 17, 2016, I was nearby when an increase in seismic activity triggered an alert. This photo was taken from the patio of a local hotel, where I was waiting with my camera. Just as the volcano erupted, the ashes seemed to glow with light. This photo is very special to me—a rare eruption of Mount Bromo with excellent lighting. 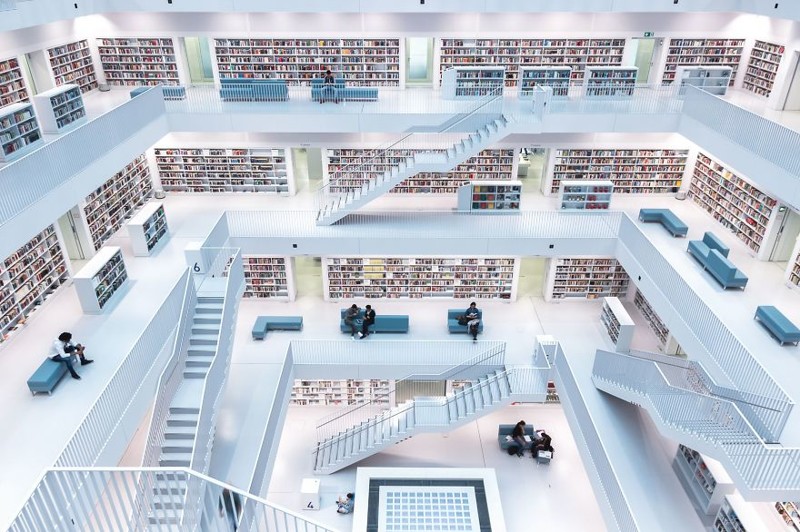 Natural light fills the modern interior of the city library in Stuttgart, Germany. With its stark white floors, open spaces, and large windows, it provides a unique atmosphere to broaden your knowledge. 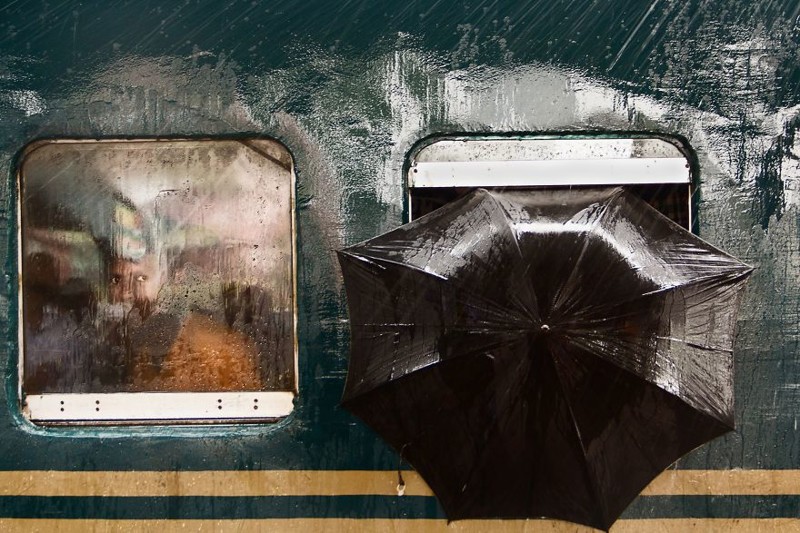 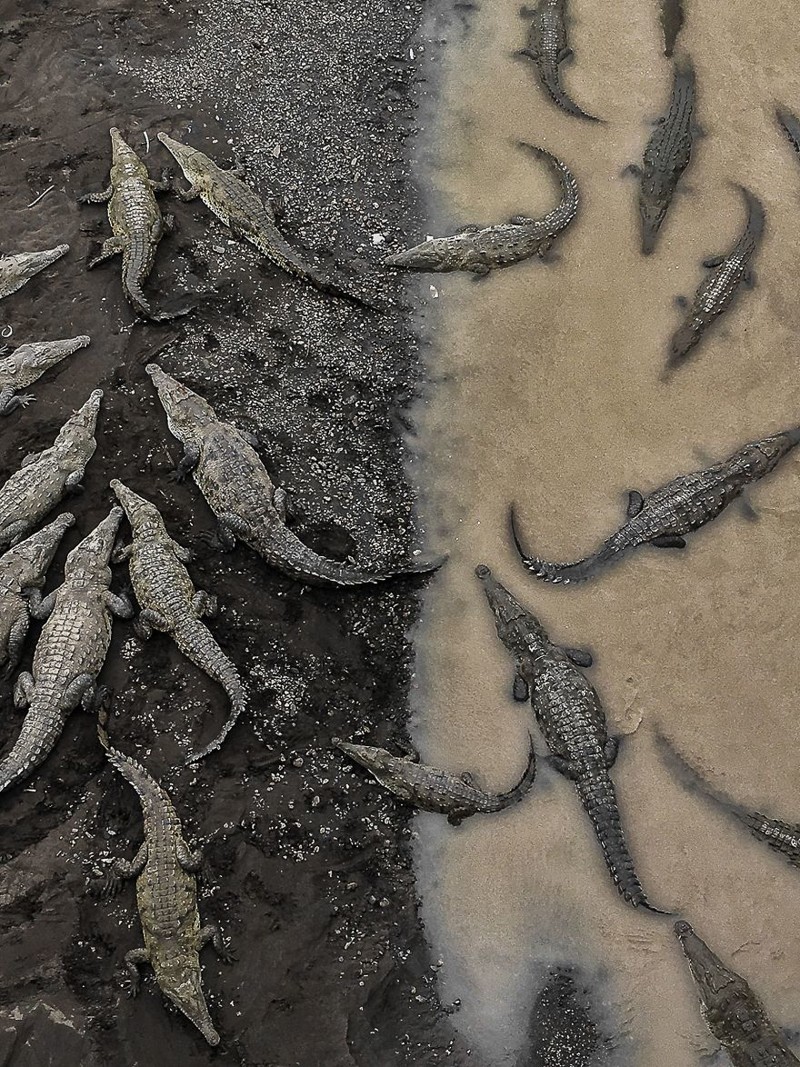 American crocodiles gather along the bank of the Tarcoles River in Costa Rica. When our guide told us there would be 30 to 40 crocodiles in the river, we thought he was exaggerating. We walked along a narrow bridge and peered over the waist-high railing, where several crocodiles were moving in and out of the water. I wanted to capture the stark contrast between their partially covered bodies in the river verses their enormous size while on full display. 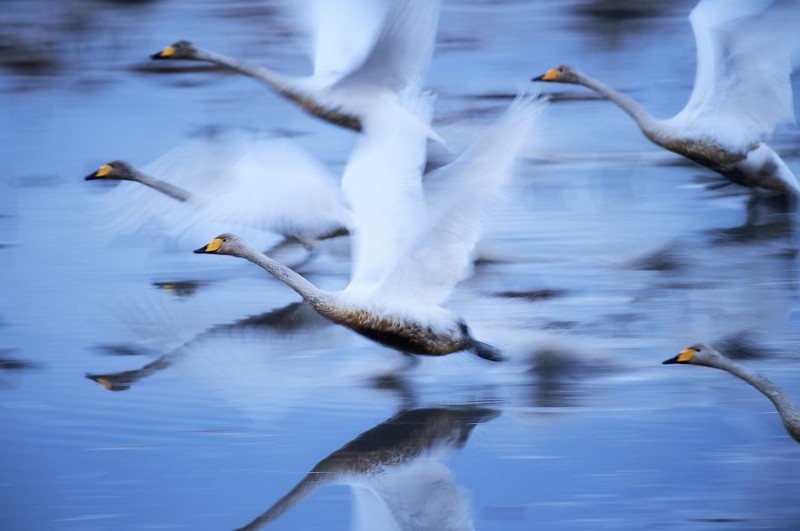 Swans glide over the water in Kabukurinuma, Osaki, Japan, a protected wetland. Since many of Japan’s wetlands have been lost, this area has become a rare wintering place for birds and may be a last paradise for them. I was particularly impressed by the swans, and careful not to disturb them when taking pictures. I took into account wind direction and shutter speed to capture the strength and elegance of their flapping wings. 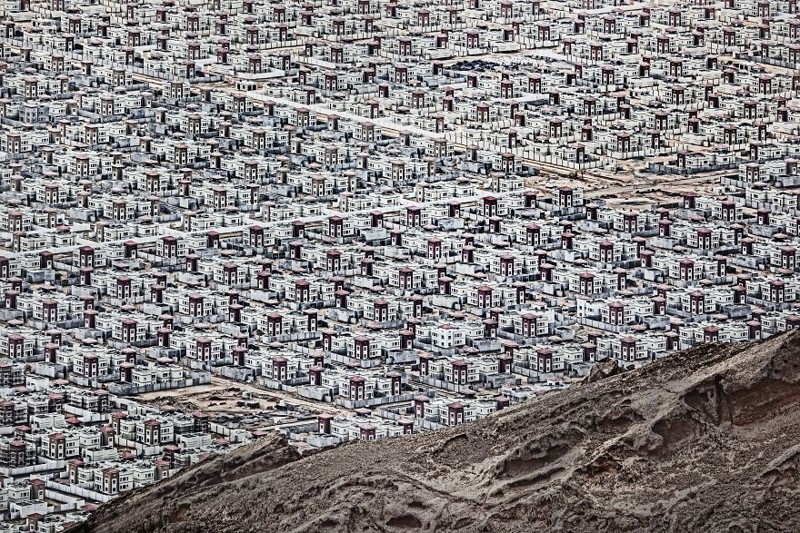 New buildings rise from the desert floor near Al Ain in the United Arab Emirates. 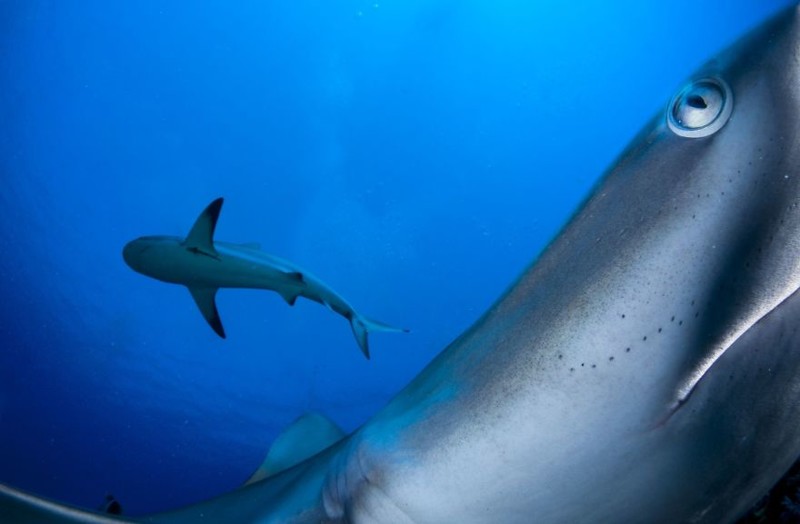 The Gardens of the Queen is a remote marine area south of Cuba, and has been protected since the 1960s. Predators, like these Caribbean reef sharks, are abundant—a sign of a healthy ecosystem. Large and fully-protected marine areas like this may be our best chance in the fight to save our fragile oceans. To get this image I placed my camera on a rock where I knew the sharks frequent, and backed away so I wouldn’t frighten them. I used a remote to take pictures while the sharks bumped my camera. 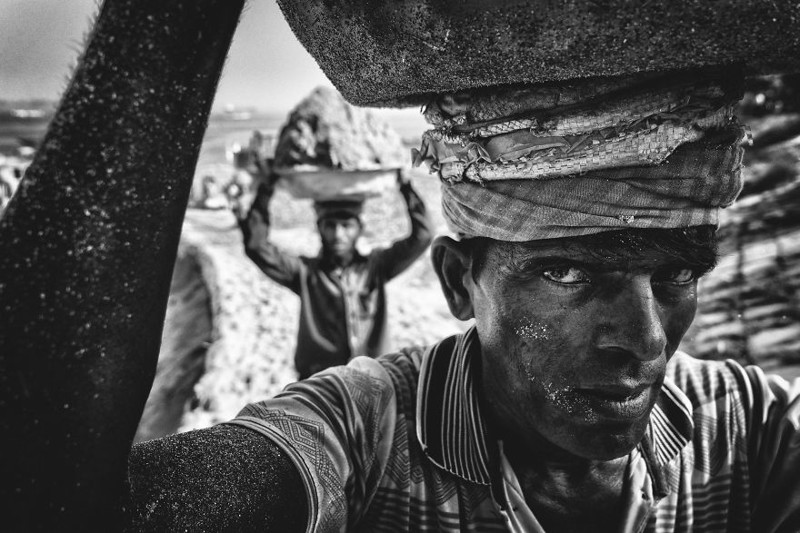 This photograph was taken from the bank of The river Dhaleswari in Munshiganj, Bangladesh during sand porters were carrying sand to preserve them on a place near the river. 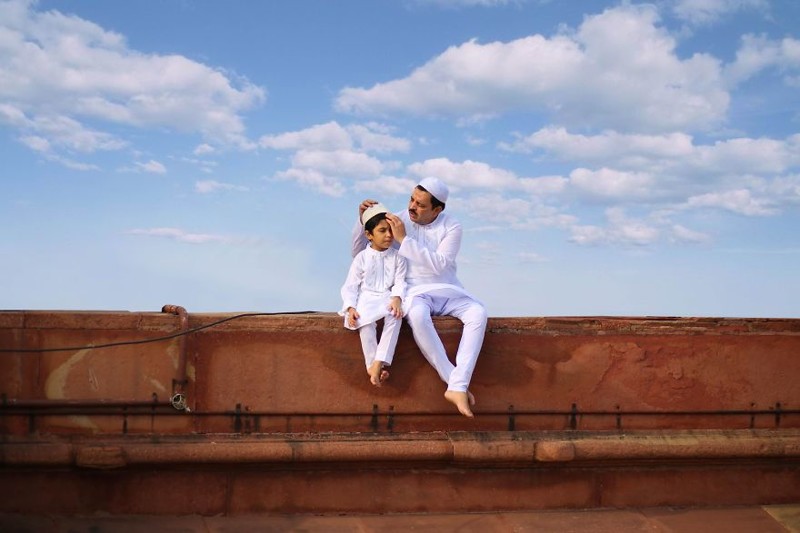 A father and son dressed in traditional white clothing sit at a mosque in New Delhi, India, under a blue sky on Eid al-Fitr, the conclusion of the Islamic holy month of Ramadan. This photo shows the beautiful bond between two generations. 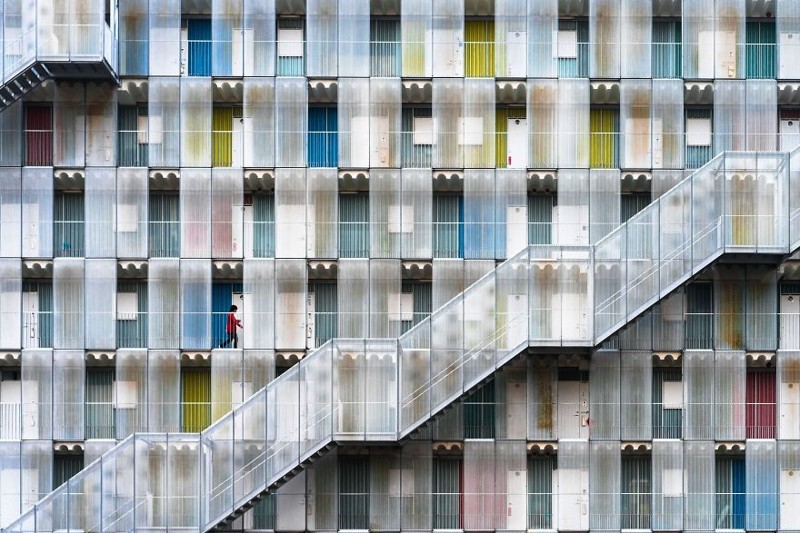 This building is a 20-minute drive from my office—it's a functioning apartment complex in Gifu Prefecture, Japan, where people live. The modern style of the building is a strange contrast to my sleepy country town, and for a long time I couldn’t quite capture its character. The woman dressed in red was perfectly consonant with the mood of this image. Without her, I couldn’t have made this image. 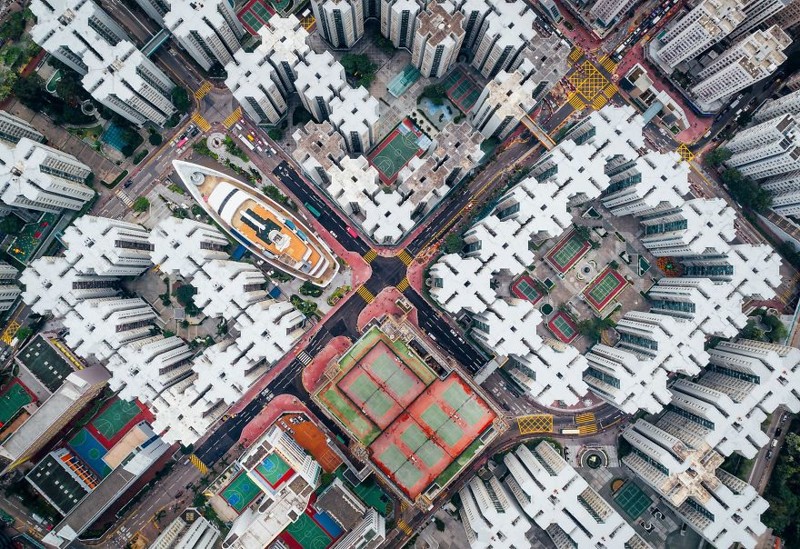 An aerial view of Whampoa Garden, Hong Kong, reveals its densely packed buildings. I drew inspiration from the Kowloon Walled City—once the densest place on Earth–which was demolished nearly three decades ago. Hundreds of houses were stacked on top of each other and there was very little open space. The Kowloon Walled City may be gone, but its legacy remains. It exists in Hong Kong’s modern architecture and stacked apartments, which have been built to accommodate the masses. 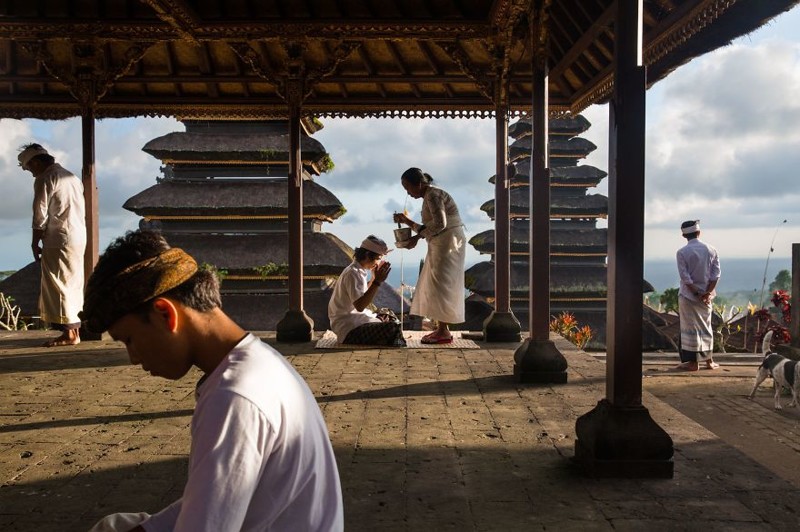 On the beautiful island of Bali, Besakih Temple has been known to locals as the “Mother Temple” for more than a thousand years. Perched high on the slopes of Mount Agung, a sacred volcano, Besakih consists of three major temples dedicated to the Hindu trinity: Shiva, Brahma, and Vishnu. Here, Hindu Balinese often visit to pray, make offerings, and take blessings from pemangku (priests). I Ventured Into The Italian Countryside And Found An Abandoned Monastery The National Geographic’s Travel Photo Contest Is Over And Here Are The Winners
We need to be sure you are not a bot. Type the characters you see in the picture below.
Обновить