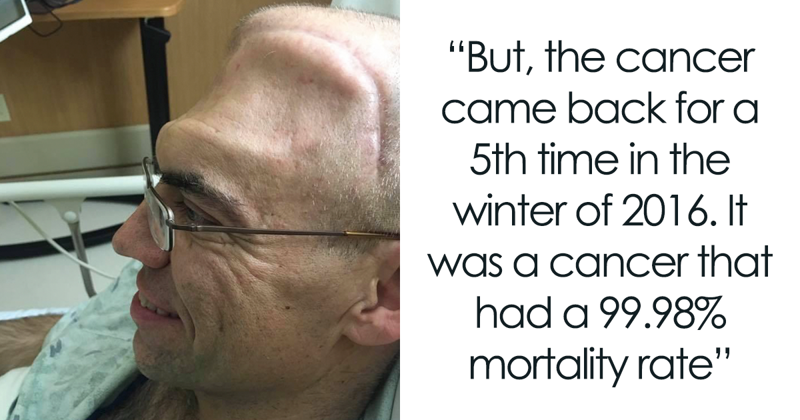 Guy Who Was Supposed To Live For 6 Years After Brain Cancer Diagnosis, Lives For 20+ Years (12 photo)

27 feb 2019 11:35
Tags: brain  cancer  life  man  patient  story  survivor
0
12
When Michael Moyles was 27, he received an injury that changed his life completely. Although the CT scan showed no serious injury and the doctors allowed him to return home the next evening, they decided to run an MRI scan, as a precaution. That’s when things started going downhill.

As doctors gathered around, all looking at the screen, trying to determine what they were seeing, Michael soon heard the worrying phrase “Mike, we’ve found something.” What followed afterward, was a year of tests and doctor visits, until Moyles finally heard his diagnosis — astrocytoma. It was brain cancer.

Recalling the harrowing time of the diagnosis, Michael notes that it was also the time when he had proposed to his then-girlfriend, Angie. “Accepting the proposal of a healthy, young, strong, up-and-coming Air Force officer, she now found herself engaged to a terminally ill cancer patient,” he explained. They married six months after Mike was diagnosed.

Despite having the love of his life by his side, the prognosis was grim. Doctors estimated that he’d have 6 or 8 years left, tops. But that was 20 years ago, and Michael is still kicking.

On April 28th, 2001, on his first wedding anniversary, Michael went through his first surgery. Dr. Keith Black and his top team of neurosurgeons removed a 2.8-cm tumor from his right frontal lobe. According to Mike, although the right frontal lobe is primarily responsible for memory, personality, and language, Moyles didn’t experience any significant changes, and within the next 6 months made a recovery.

He was in remission for 4 years when a check-up scan in the spring of 2005 showed that the cancer was back. “Larger, faster-growing, and more aggressive, this time we couldn’t watch it for a year to see what it was doing,” Michael elaborated. He underwent a similar surgery once more, but since the tumors were reoccurring, doctors recommended chemotherapy. “This is a word that will strike fear into the heart of even the most hardened patient, and I was no exception,” Moyles added.

Months of chemo followed until Michael discovered that exercise, especially running, made him feel better. Soon he was running his first marathon, all while going through chemotherapy. However, as he finished the treatment, the cancer returned, therefore the oncologists decided to continue with chemo. Throughout the next 10 months Moyles continued chemotherapy, ran two more marathons, and had a daughter. However, despite all his fighting, the cancer grew resistant to the treatment and Mike had no choice, but to go for another surgery.

The path that followed wasn’t easy. Michael faced a plethora of medical complications that resulted in a piece of his skull being removed. Chemo, surgery, and radiation all were keeping the cancer at bay and that allowed Moyles to fight for another day. He started running again and eventually created “Team Michael Moyles”. “My brother-in-law, Clint Janson, and I started the team in 2008, and by 2012 had raised almost $100,000 through running raises, giving motivations speeches, silent auctions, and a number of other endeavors” Mike explained.

Recently, Michael’s nephew, Søren Janson, shared his story on Reddit, where it attracted attention, gathering almost 17k upvotes and 721 comments. “In my opinion, the best quality is his undying faith and perseverance, and absolutely refusing to give up,” Søren told