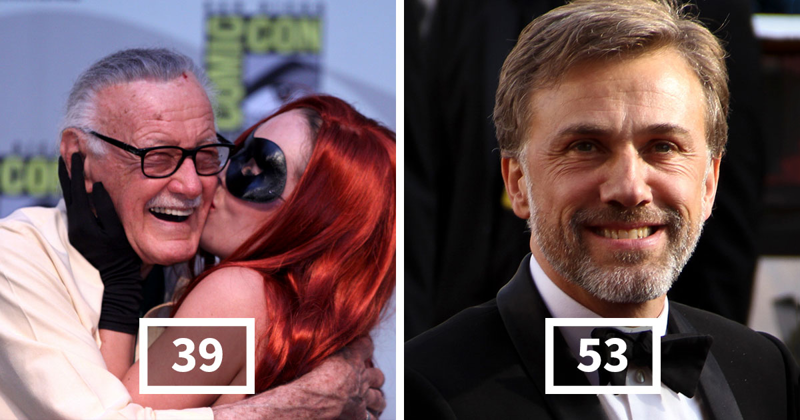 01 apr 2019 14:37
Tags: age  famous  life  motivation  people  story  success
0
31
A lot of people give up on their dreams because they think they are too old. Well, judging from the stories of so many successful people, if you're are in your 20's, there's a good chance success is still coming to you. Yet it doesn't always feel like that, especially when it looks like everyone has flourishing careers by the time they turn 25. Famous people to prove that sometimes it takes a little longer to get at the top of your game

The iconic comic book writer Stan Lee joined the industry when he was only 17 years old. Back then he began working as an assistant in the comic book department for the company called Timely Publications. However, even after he was promoted from filling inkwells and erasing pencil marks to running the department it took him some time to become a success. Stan Lee published his first comic book hit only in 1961 when he was almost 39 years old.

Actor Alan Rickman who is best known for his role in Harry Potter started his career in a completely different field. Before his acting days, he pursued a career in graphic design. Rickman even opened a graphic design studio called ‘Graphiti’. At the age of 26, Rickman decided to become an actor and attended the Royal Academy of Dramatic Art. His talents were recognized only after starring in “Die Hard’ in 1988 when he was 42 years old. His fame skyrocketed when he portrayed Severus Snape in the first movie of the Harry Potter Series in 2001 when he was 55

Bob Ross spent 20 years in the US Air Force, upon retiring he taught himself to paint and became everyone's favorite painting teacher at the age of 41

One of Hollywood's most respected stars, Morgan Freeman loved acting since he was a child, however upon graduating high school he chose to join Air Force to become a fighter pilot. The actor eventually left Air Force to establish himself as an actor, but it took him a while to do so. He was 50 years old when he landed his first big break in a movie Street Smart.

Today 70-year-old Samuel L. Jackson is known as one of the highest-grossing actors of all time who starred in more than 100 movies. Samuel took interest in drama back in his early 20's however he only became world famous when he was 46, for his outstanding role in film Pulp Fiction.

Before his big break, Steve Carell didn't get any major roles, but his career took a huge turn when he received a role in series The Office when he was 43 years old.

At the beginning of his carrier, Harrison Ford was not happy about the roles he kept receiving, so he decided to become a self-taught carpenter to support his family. However one of his roles eventually helped him land a role in a Star Wars film. The film was a major success and it kickstarted Ford's career at the age of 35

Christoph Waltz and Austrian-German actor received his first big break which led him to international fame at the age of 53, after starring in Inglorious Bastards.

Colonel Sanders, the man behind one of the worlds most famous fried chicken chain, KFC, had a hard time holding down a job. As a result, he had many different jobs. At some point he was a fireman, stem engine stoker, insurance salesman, he even practiced law and was fired quite a few times. However, the man found his place and his purpose when he began selling fried chicken in his roadside restaurant in the 1930s. Sanders perfected his secret fried chicken recipe and in 1952 the first KFC franchise was opened when Sanders was 62 years old.

When Liam Neeson was fresh out of university he had a variety of casual jobs, such as forklift operator and a truck driver. After getting his first acting role at the age of 25, Neeson had to wait until he was 40 years old to receive his first big break in the movie Schindler's List.

Before J.K. Rowling wrote Harry Potter, the best-selling book series in history, she has struggled with depression, poverty, tried to recover after a bad divorce and was looking for a way to provide for her child. During this tough time, Rowling began writing Harry Potter. The first book of the series was published in 1997 when she was 32 and kickstarted her astonishing career as a writer.

For a long time, the singer Susan Boyle received no recognition for her talent. However, things completely changed in 2009 when she appeared on Britain's Got Talent and become an instant success. She was 47 years old.

After years of single-appearance television roles, Bryan Cranston received his first major breakthrough by landing a role in the sitcom Malcolm in the Middle when he was 44 years old. Eight years later he gained international fame for his role in Breaking Bad.

Viola Davis developed a love for acting back in high school and appeared in numerous films before getting her first big break in 2008 when she received the role in Doubt at the age of 43. Despite only having one scene in the film, her performance was so impressive that it gained Davis her first Oscar nomination paved her way to success.

Ken Jeong started his career as a physician, however, when he was 38 he landed a role in Knocked Up which kickstarted his acting career. Jeong made a decision to quit medicine and become a full-time actor soon after.

In his early life, Danny Trejo was in and out of jail and struggled with drug addiction. His life was changed when the director of Runaway Train, offered Trejo a role in the film. The film kickstarted Trejo's acting career when he was 41 years old.

Most of us know Julia Child for her best-selling cookbooks and a TV show but it took a few career changes for her to discover cooking. In fact, she was quite bad at cooking when she was in her 30's. Right after graduation, she worked as a copywriter and during World War II she was a spy. Things have changed in 1948 when she attended the world-famous Cordon Bleu cooking school. She wrote her first cookbook when she was 50 and launched her career as a chef in 1961.

In 90s Jonathan Daniel Hamm was still working as a waiter and had a hard time finding acting jobs. Hamm promised himself to quit trying if he won't succeed until his 30th birthday. Luckily the actor received some acting jobs to keep him going. But his first big break happened when he was 37 and was offered to play Don Draper in Mad Men.

When Oprah Winfrey was in her 20's she has a job as a news anchor, however, she was fired for being too emotional about the stories she was reporting. Oprah's outstanding empathy eventually help her in creating one of the most popular talks shows The Oprah Winfrey Show in 1986, when she was 32.

In mid-1980s Billy Bob Thornton had a hard time succeeding as an actor and had to take jobs in telemarketing and fast food managing to support himself between auditions. His big break happened when he wrote, directed and starred in Sling Blade in 1996 when he was 41.

Prior to his acting career, James Gandolfini was a bartender and a club manager. After he was introduced to acting, he received a role that brought him worldwide fame in the smash hit series Sopranos, when he was 38 years old.

Sylvester Stallone struggled to find acting jobs and at some point, he was even homeless. Trying to find a way to make ends meet, he even took a role in a pornographic film. However, things started looking up for him when he received a role in a smash hit Rocky when he was 30 years old.

After spending years working as a psychiatric nurse Kathryn Joosten decided to join her community theater when she was 42 years old. She managed to work her way up into Hollywood and landed the role in "The West Wing" when she was 60.

After a variety of roles both in film and television Jane Lynch gained her long-awaited fame by scoring a role at musical television series Glee, at the age of 49

One of America's most celebrated novelists Toni Morrison worked as an editor for years. Only in 1970, at the age of 39, the writer published her first book and received recognition for talent.

For several years after graduating from Juilliard Jessica Chastain struggled to get the first breakthrough. However, in 2011, when she was 34, Chastain starred in 6 releases and one them, The Help, brought her international fame.

The man behind McDonald’s, one of the most popular burger chains in the world, took a long road to success. Ray Kroc was 52 years old when he brought and popularised the McDonald's chain, which landed him an enormous wealth of $600 million.

Martha Stewart a successful entrepreneur and media personality haven't reached fame up until she published her first cookbook in 1982 she was 41 years old. Before that, Stewart was working as a stockbroker in Wall Street and after quitting she began running a catering business. Her first book was a big hit which eventually led to many other books, a magazine, a TV show and a net value of more than $638 million.

Kerry Washington, one of the best African–American actresses of this generation, had several important roles, but her first big break didn't happen up until she scored a role drama series Scandal, created by Shonda Rhimes. Washington was 35 years old at the time.

At age 41, after a series of entrepreneurial ventures, Fisher and his wife Doris Fisher founded The Gap. It's now a $16 billion a year company with more than 3,200 locations worldwide. Great-gran claims she has drunk nothing but Pepsi for 64 years
We need to be sure you are not a bot. Type the characters you see in the picture below.
Обновить