15 sep 2013 13:51
Tags: awesome   cool   creative   intense   interesting   popular   review   trending   tv
1403
12
Us normal people, we complain about things on Twitter, to our friends, and in the comments sections of websites dedicated to Breaking Bad and occasionally other TV shows. We rarely do anything about the thing we’re upset about, because the things we’re upset about rarely matter. Or we’ll move onto something else to bitch about after a day, and the cycle starts a-new. Think about how mad you have to be to actually do something, about the number of steps it takes to go from watching a dumb awards show on MTV to being so shocked and appalled that you file an official complaint with the FCC about the horrors you just saw. Eh, I’d rather GIF it.
Lucky for those of us who know which battles are worth fighting for (BRING BACK ARRESTED DEVELOPMENT … wait, they did what?), there are those who live their lives constantly on the lookout for something to be offended by. Many, many, many people were angered by Miley Cyrus’s VMAs performance, and many, many of the many, many, many wrote to the FCC, the list of which the Smoking Gun obtained. Here are some of our favorites. 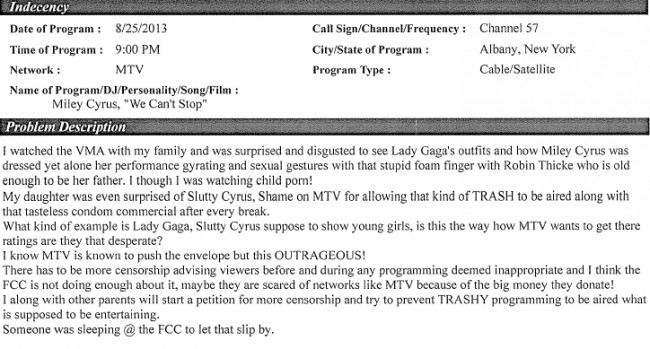 0
I think we can all agree this was entertaining =]