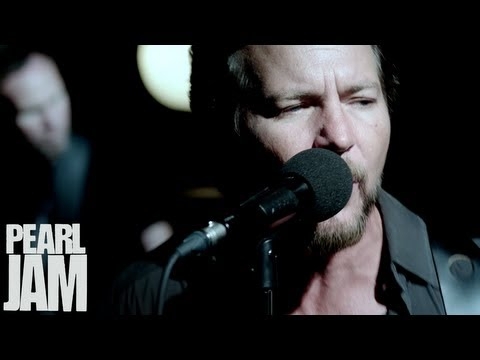 25 sep 2013 16:20
Tags: awesome   celebs   cool   interesting   music   news   style   topics   trending   weird
1262
1
Pearl Jam are keeping it simple for the second video to emerge from their ‘Lightning Bolt’ album. The guys have just unveiled the new clip for ‘Sirens’ and it’s strictly a performance piece.
But as with most Pearl Jam performances, there’s little ordinary about it. The veteran rockers hit their stride on this mid-tempo track, which showcases not only Eddie Vedder‘s vocal work, but also some impressive backing vocals from drummer Matt Cameron.
Shot mostly in a dark room lit with the occasional white and red lighting, the video takes the viewer right into the crux of the performance with the band. In addition, to Vedder and Cameron, there’s also a spotlight for guitarist Mike McCready who busts out a second guitar midway into the clip to bring some electric licks to the track.
Overall, ‘Sirens’ is a pretty straightforward video, but if anything this promo should show fans that the band has a solid new song to perform live once they hit the road this fall. You can count ‘Sirens’ among the standout new tracks that will make up ‘Lightning Bolt.’ The disc drops Oct. 15.