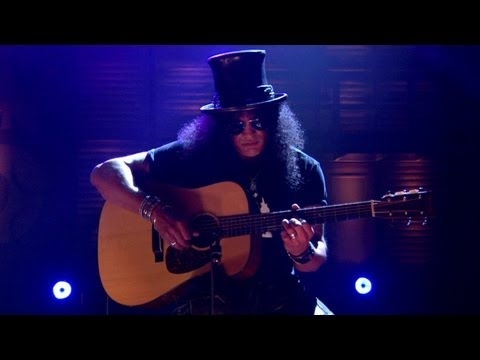 30 sep 2013 12:47
Tags: awesome   celebs   cool   interesting   music   news   style   topics   trending   weird
4480
1
When you’re one of the most famous guitarists on the planet and you’re making a move into filmmaking, it’s pretty much a given that you’re going to make an appearance on your first movie’s soundtrack, right?
That seemed a fairly foregone conclusion when we heard that Slash was heading for Hollywood with his Slasher Films production company, and now that Slasher’s first movie, ‘Nothing Left to Fear,’ is on its way to theaters, we’re getting our first taste of the Slash-assisted soundtrack album. He appeared on the ‘Conan’ show last night with his musical buddy Myles Kennedy, and the duo performed a new song titled — you guessed it — ‘Nothing Left to Fear.’
Written and produced in collaboration with composer Nicholas O’Toole, the ‘Nothing Left to Fear’ soundtrack consists mainly of the movie’s score, with a pair of songs — the title track and an instrumental called ‘The Road to Stull’ — rounding out the 32-track CD. According to Slash, the process gave him an opportunity to explore a different side of his artistic personality. As he put it in a press release, “Film scoring prompts me to engage different styles of writing and guitar playing that don’t always present themselves when I make rock ‘n’ roll records.”
The film itself is set to debut in limited release on Oct. 4, and promises “a harrowing tale in the spirit of the terrifying horror films of the 1970s” with a story “inspired by the legend of Stull, Kansas, which is surrounded by Internet folklore proclaiming the town to be one of the Seven Gateways to Hell.” Have a look at the footage above, and let us know if the song brings Midwestern demons to mind.