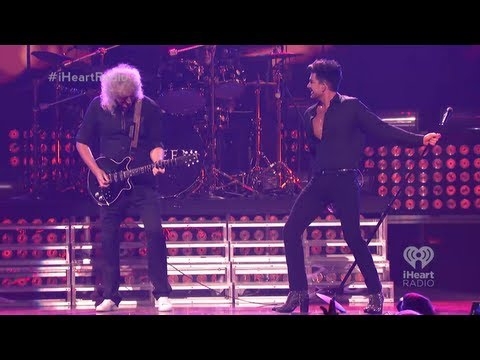 25 sep 2013 16:03
Tags: awesome   celebs   cool   interesting   music   news   style   topics   trending   weird
1170
1
The surviving members of Queen were joined by two pop stars during their performance at the iHeartRadio music festival in Las Vegas yesterday. Adam Lambert and the frontman for fun. played two classic Queen songs with the band.
Former ‘American Idol’ Lambert, who’s sang with Queen before, performed a handful of Queen classics with the band, including ’We Are the Champions,’ ‘A Crazy Little Thing Called Love’ and ‘Bohemian Rhapsody,’ according to Rolling Stone.
They were then joined by fun. frontman Nate Rues, who sang lead on ‘Somebody to Love.’ Lambert then joined them all onstage for ‘Fat Bottomed Girls.’ You can watch video from the concert above.
The genre-spanning iHeartRadio fest, which takes place in Las Vegas this weekend, also included performances by Katy Perry and Elton John, who performed classics like ‘The Bitch Is Back’ and ‘Bennie and the Jets,’ as well as some cuts from his new album, ‘The Diving Board,’ which comes out on Tuesday.