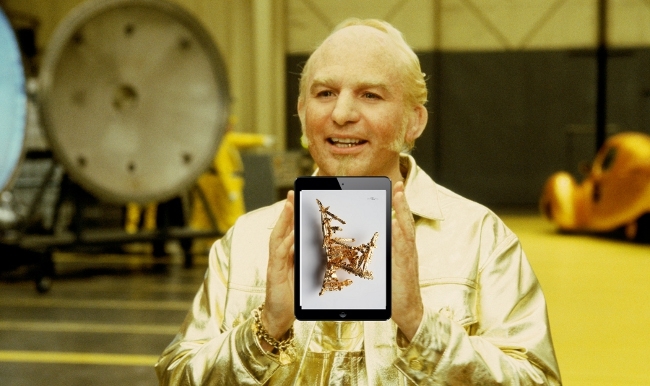 Apple May Be Making A Gold iPad Mini (1 photo)

27 sep 2013 20:36
Tags: awesome   celebs   cool   interesting   music   news   style   topics   trending   weird
911
1
This news is less than surprising, given our apparently bottomless lack of taste as a species; a gold iPad Mini might be on the way as part of the Mini refresh. And it’ll also have the amusingly useless nipple scanner…errr…Touch ID because why the hell not?
The rumor comes courtesy a Chinese site called DoNews, which has a spotty track record when it comes to this stuff, but it’s not like they’re telling us something a large corporation that likes money wouldn’t do. And honestly, it makes sense.
Apple likes its mobile devices to look fairly similar to each other. The iPad and the iPhone have generally mirrored one another in design, and the Mini followed the trend; as wrong as all the old jokes about an iPad being four iPhones duct-taped together turned out to be, both are unmistakably Apple products that are part of the same line.
And the iPad Mini is staggeringly popular, to the point where it’s outselling the iPad. So, considering how quickly the gold iPhone sold out, to some degree it only makes financial sense to give the people what they want and sell a matching Mini.
All that said, it does so far appear that the iPad line, at least, will be spared the indignity of becoming a prop for insecure people to try and tell you how wealthy they are, but since those people will just have the thing gold-plated anyway, we guess in the end it’s a wash. 0
Anthony 4 years prev
I had read lots of about the apple. Apple's designs are, well, elegant. There is no better word for it. Sony and Toshiba can come close at times, but, on average, Apple has the best-designed hardware from an aesthetics point of view of any vendor.
essaypaperreviews.com/
0
Reply  •  Link  •  Report this  •
Share ›
Show all
Show more (from _)