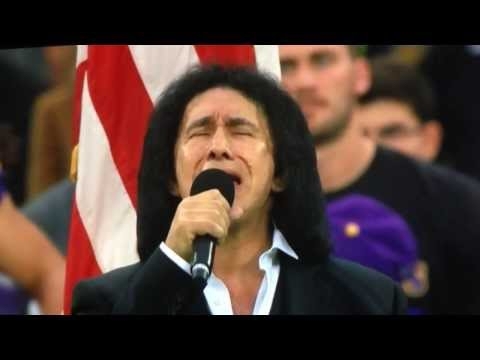 30 sep 2013 12:42
Tags: awesome   celebs   cool   interesting   music   news   style   topics   trending   weird
4151
2
If you felt an extra burst of patriotism this past weekend, it may have been because of what a few of your favorite classic rockers were up to.
As we previously reported, Gene Simmons of Kiss headed to London over the weekend, where he helped kick off a special U.K.-hosted matchup between the Pittsburgh Steelers and Minnesota Vikings by performing the national anthem. We’ve seen Simmons sing ‘The Star-Spangled Banner’ before — he did it at an Oakland Raiders game in 2012 — but if you’re eager to hear his latest take on the tune, you can watch it in the video above.
Meanwhile, back in the U.S.A., Neal Schon and Jonathan Cain of Journey fulfilled their previously reported obligation to travel to Tempe, Ariz., and perform their own rendition of the anthem before the Arizona State-USC game on Sept. 28. As you can probably guess, Schon and Cain took a different approach to the song, putting together an arrangement for keyboards and guitar rather than the standard a cappella version, but the crowd didn’t seem to mind the lack of vocal pyrotechnics.
You can watch Schon and Cain’s ‘Star-Spangled Banner’ below, and decide which version you prefer — theirs or Simmons’. Or maybe some enterprising soul with the right software can give us all the best of both worlds by mashing both versions together to create a classic-rock national anthem megamix.