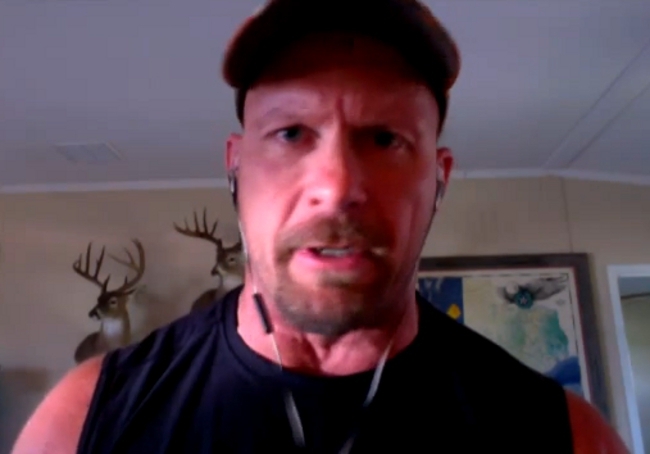 30 sep 2013 00:35
Tags: conference   division   news   season   sports   topics   trending
3207
1
Ariel Helwani had a bevy of big name guests on The MMA Hour Monday, as Uriah Faber, Chael Sonnen, Dan Hardy, Chris Weidman, Georges St-Pierre, Anderson Silva and Conor McGregor stopped by to fill us all in on what they’re up to and much more importantly what they thought of the main event at UFC 165. But the big guest for the show was WWE legend “Stone Cold” Steve Austin, who broke into the podcast business earlier in the year and is quite the casual MMA and UFC fan.
For starters, Austin said that while he’s certainly no MMA scoring expert, he had Alexander Gustafsson winning Saturday night’s fight 3-2, but he agreed with pretty much all of us that a unanimous decision was laughable. Regardless, he thinks that Gustafsson became a superstar in his loss to Jon Jones, and he also agrees with a lot of us that some fighters are really lacking in the personality department.
But the biggest tidbit to take away from Austin’s interview involved the recently retired and equally legendary Jim Ross, as Helwani asked him if he thinks Ol’ J.R. would be a great addition to the UFC.

“I do, just because the guy has 30 or 40 years of experience with storylines, angles, knowledge, booking and how things worked in our world. Yes, I think he can help in some capacity, some way and somehow. But I have to turn that question on you – do you think he can help?”
Stone Cold has already mastered his role as a podcast host, always knowing how to get the best of a conversation by flipping the question on someone. Anyway, the snap judgment fan answer to this question is YES. YES PLEASE. YES YES YES YES YES YES YES YES. That’s because J.R. is just an awesome commentator and not having him on a broadcast is a crime.
However, Helwani’s response to Austin was the much more logical answer, in that actually having him on air calling fights would probably be a big mistake because of how closely associated he is with professional wrestling. After all, when so many people are screaming fake and accusing the UFC of rigging fights, you don’t want to encourage them by hiring a WWE guy to sit in the booth with Joe Rogan and Mike Goldberg. Even though it would be so awesome to hear him shout, “OH MAH GAWD, THAT’S JON JONES’ MUSIC!”
And in case you’re wondering if Austin is itching to get back in the ring for the WWE anytime soon, you can stop.
“I know a lot of fans want to see that. But what if it’s not what it could have been or should have been? I don’t want to go out there and do 90% of ‘Stone Cold,’ that’s not who and what I am… I was there, I did it at a high level, I had a great time. I took the business to a height that it’s never been before. Hopefully someday someone will come on now that I’m done and take it to an even higher level. John Cena has done a wonderful job doing what he’s done. Man, I’d say the chances are pretty damn slim, to be frank about it.”
If anything, I think it’s Austin who should have a role with the UFC, teaching young fighters how to record a promo.