The Tampa Bay Rays, like the Yankees, Orioles and Blue Jays, have been eliminated from contention in the American League East, because the Boston Red Sox steamrolled their way to the current 8-game lead and the division crown. But the Rays at least have their hopes set on a Wild Card berth and right now things are looking pretty good with a 1.5 game lead over the Texas Rangers, who have lost 7 of their last 10. But that still doesn’t mean Tampa can let up, which was evident in the Rays current three-game winning streak that has all but eliminated the Orioles from Wild Card contention. On Friday night, though, the Rays were locked in an 18-inning duel with the O’s and at some point the crazy train showed up to the station, as Luke Scott and Co. got a little crazy in the dugout. 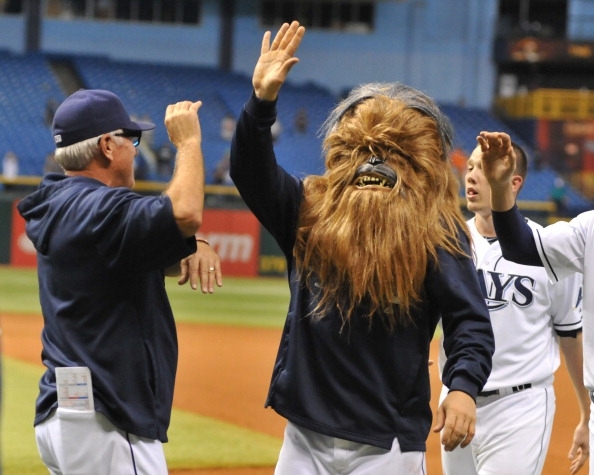 0
That’s Scott rocking the Chewbacca mask, while KISS Army and gladiator costumes made appearances. Even Orestes Destrade took a break from broadcasting to get rubbed down by a fine Tampa lady.

Fun fact: When I was younger and Destrade played for the Florida Marlins, my friend and I called him Notestes Destrade. Because we were idiot children, you see. As for the Chewbacca mask, blah blah blah Step Brothers quote: