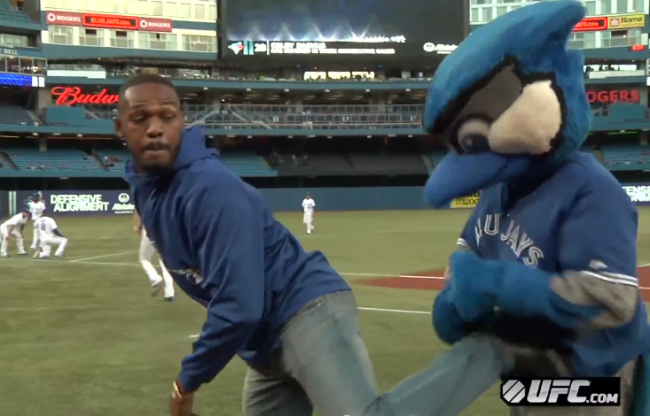 30 sep 2013 01:11
Tags: conference   division   news   season   sports   topics   trending
4037
2
2
Jon Bones Jones is set to defend the UFC Light Heavyweight Championship against Alexander Gustafsson at Saturday’s aptly-named UFC 165: Jones vs. Gustafsson in Toronto. To prepare, he’s visiting Canadian sporting events and beating up whoever he finds there. At Rogers Centre it was Toronto Blue Jays mascot Ace, and also maybe Alex Rodriguez.
Jones threw out the first pitch at at Thursday night’s Blue Jays vs. Yankees game, and while it lacks the wacky fail of Carly Rae Jepsen’s effort, the passion of that one 2-year old who refused to throw from the grass or the weird accuracy of Holly Sonders chipping it in with a golf club, it’s worth watching and possibly scoffing at. Plus, it’s another in a line of great examples of how “being a good athlete” doesn’t translate to “being able to throw a ball.”
It’s not super horrible, though. Check it out: 0
I can’t believe he was that close to Alex Rodriguez and didn’t clutch the head and start throwing knees.

That fight was a little more competitive. You can check out that clip here. The first attempt was too low. Years later in Toronto, his second attempt was too high. Maybe his third attempt will be right across the plate?

And hey, while we’re on the topic of one of our country’s best athletes not being able to do athletic shit, let’s remember that time Jon Bones Jones tried to dunk a basketball.