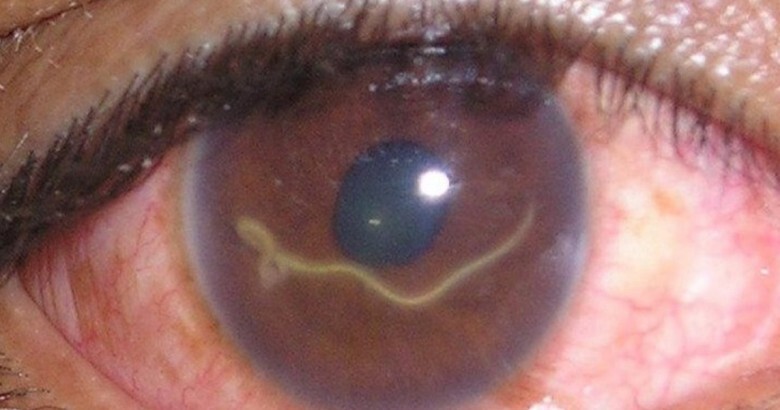 It’s like something out of a story by Franz Kafka. Russian doctors found a fir tree growing in Artyom Sidorkin’s lung. In 2009, Sidorkin experiences severe chest pains and starts coughing up blood. He thinks he has cancer. The 28-year old visits the doctor and has an X-ray, which, at first, seems to confirm the cancer diagnosis. It’s later determined, however, that the mass isn’t a tumor. When the doctors open up his chest, they find a two-inch fir tree. “I thought I was hallucinating,” said Dr. Kamashev. “I asked my assistant to have a look. Come and see this: we have a fir tree.” Doctors believe Sidorkin somehow inhaled a seed that sprouted in his lung. It started with nosebleeds. And it ended with Scottish doctors pulling a three-inch long leech out Daniela Liverani’s nose. Apparently, the 24-year old graduate student from Edinburgh picked up the leech while traveling around South East Asia, most likely while swimming in Vietnam, but she could’ve gotten it from drinking water, also. The leech lived in Liverani’s nose for over a month before she eventually spotted an “object” in her nostril. Why Daniela Liverani didn’t feel a leech “as long as my forefinger and as fat as my thumb” swim up her nose is anyone’s guess. “Two weeks before I came home from Asia, I started having nosebleeds,” Liverani told the Daily Mail. “But I’d fallen off a motorbike so I thought I’d burst a blood vessel.” She believed what she saw was congealed blood from the fall. At first, Li Meng thought the scratching noise was an evil spirit. She went to a temple to pray. But the scratching was so loud, and the pain in her ear so severe, Meng made an appointment with a nose and throat specialist. Doctors at Xiamen City Hospital discovered a live spider building a web in Meng’s left ear canal. How did it get in there? The doctors didn’t know for sure, but guessed that the spider probably crawled in her ear when she was on a hike with her boyfriend. Each attempt to get the spider out of Li Meng’s ear failed -the eight-legged creature just burrowed farther into the canal. Eventually, the doctors sedated the spider with syrup and managed to extract it.

In 2015, Ana, a 10-year old Brazilian girl, had 15 maggots removed from her gums after complaining of a tingling sensation and of things squirming around. The dentist diagnosed Ana with oral myiasis, or an infection of fly larvae, a rare occurrence in which maggots live on the host’s tissue. The flies typically lay eggs in the mammal’s body through an open cut,. While oral myiasis is rare, it does occur in parts of the world with poor sanitation, and especially warm climates. The doctor was able to successfully remove the maggots from Ana’s gums with a pair of tweezers.

Belize, 2007. Aaron Dallas has the time of his life on vacation, only to return home to discover that he has several strange bumps on his head. At first, the Colorado doctors are puzzled. However, when the oddly shaped bumps start to squirm, they realize that Dallas is infected with 5 Botfly maggots. The maggots were successfully removed, and Aaron Dallas later told reporters that he could feel and hear the parasites moving around in his head. Mr. Dallas isn’t the only tourist to be infected with Botlfy maggots. After returning from a trip to Peru, Rochelle Harris had to have eight maggots surgically removed from her head.

Mya Whittington’s jaw was the size of a golf ball. The doctors thought the 7-month old girl had a swollen gland. One can only imagine the look on their faces when they plucked a two-inch feather from the baby’s neck. Okay, so little Mya Whittington is no relation to Birdman; she’s not going to sprout wings and take flight. Doctors in Kansas think the girl accidentally swallowed the feather, which then pierced the inside of her throat and neck and got lodged there; her body then began forcing the foreign object out. Mya’s father Aaron Whittington summed it up best: “They pulled a feather out of my child. How crazy is that?”

According to the Centers for Disease Control and Prevention, the number of fluke worm infections (paragonimiasis) rose dramatically in 2009 and 2010. In many cases people get paragonimiasis from eating uncooked crawfish. Lung worms are most common in Asia and parts of rural Appalachia. Symptoms include fever and cough, and doctors often misdiagnose the infection for tuberculosis. In 2015, Animal Planet featured a segment on Missourian Chris Motsinger on the show Monsters Inside Me. After suffering chest pains and coughing up bloody phlegm, doctors discovered that a fluke worm that uses mammalian lungs to complete its life cycle had invaded Chris’ respiratory system. Dark spots. Blurred vision. John Matthews thought he was losing his eyesight. “It’s like looking through a muddy lens,” he told his doctor. At first, Dr. James Folk couldn’t find anything wrong with John’s eye. But then… there it was: a microscopic worm swimming (and feasting) on John’s retina. Little is known about the species of microscopic worm, as there have only been 15 known cases. Apparently, the worm is ingested, it then makes its way through a person’s tissue to their eye, where it survives by feeding on the retina. Dr. Folk was able to kill the worm with a laser. Sadly, John’s sight will never fully recover. Imagine going out to dinner and having your mouth inseminated by a partially cooked squid. That’s what happened to a 63-year old woman in South Korea. When the woman bit into the semi-boiled squid, she felt a “prickling and foreign body sensation.” Although she quickly spat the squid out, there was pain and discomfort in her oral cavity. Doctors later discovered that the squid’s sperm bags had come out –“twelve, white spindle-shaped, bug like organisms” looking for a female egg were lodged in the mucous membranes of the woman’s tongue and cheek. Sperm stings from raw squid are common in Japan, but unlikely in the West, where all internal organs are removed during preparation.

The good news: Ron Svedan, age 75, didn’t have cancer. The bad news: the retired teacher from Brewster, Massachusetts had a half-inch pea plant growing in his lung. In 2010, Ron Sveden arrived at Cape Cod Hospital on Memorial Day weekend with severe coughing spells and shortness of breath. X-Rays showed that Ron Sveden’s left lung had collapsed; there was also an ominous looking dark spot. However, the biopsy came back negative for cancer. Doctors eventually found that Sveden had a pea sprouting inside his lung. They concluded he ate a pea that “went down the wrong way,” which then germinated in the dark, moist environment.

Easy Stretches You Can Do To Improve Your Body