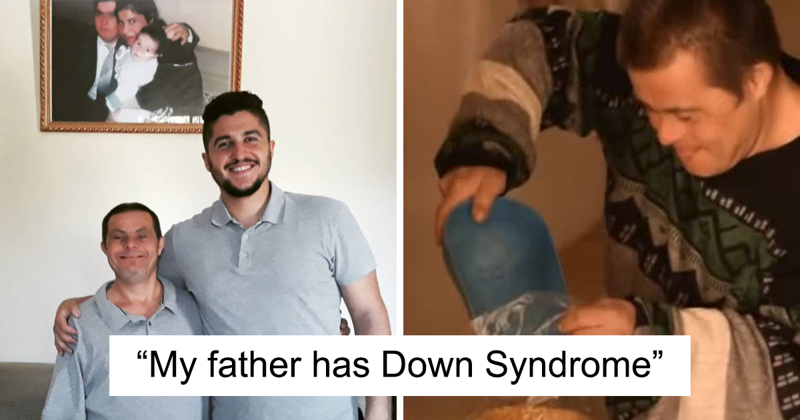 17 oct 2019 14:22
Tags: Down Syndrome  childhood  father  parent  story  syria
0
13
1
Parents with Down Syndrome are just as loving as any other parents. That’s the lesson we can all learn after hearing a Syrian student’s tale about his father.
Sader Issa, who studies dentistry in Syria, shared the story of how he was raised by his dad Jad who has Down Syndrome. According to Jad’s son, his dad showered him with love and did the best that he could to make his childhood the same as any kid’s.

In a video interview, Sader Issa told the Syrian Society for Social Development all about being raised by his dad who has Down Syndrome

Sader isn’t ashamed of his father; in fact, he’s very proud of him because he helped turn him into the person with the right values that he is today. Nobody is saying that living with Down Syndrome is easy, however, Sader and his father Jad managed to create a loving relationship that some people would be envious of.

Sader’s dad is named Jad and he has Down Syndrome…

Father and son often go together to the former’s workplace at the mill near their home. “I’m proud of my father. Throughout my life he has been the greatest support for me when I needed it,” Sader said about his father who is viewed favorably in his community because people know that he expresses his love for others without wanting or expecting anything in return.

…however, the relationship between the father and son is warm and loving, like you’d expect in any family

One of the things that really hit us right in the feels is that Jad often tells people that he’s proud of Sader by saying “my son is a doctor.”

“It’s possible to see when his eyes are filled with joy and satisfaction, as if to express: yes, I have Down syndrome, but I raised this man and did everything in my power to make him become a doctor and help others,” Sader explained.

97 percent said that they were proud of them and 79 percent thought that their outlook on life was more positive because they have them in their lives. Only 5 percent of parents were embarrassed by their offspring and 4 percent regretted having them. This means that the vast majority of parents with Down Syndrome are happy to be raising their kids just the way they are.

Sader’s father loves others without reservation, without expecting anything in return. He is incredibly proud that his son is studying dentistry

The NDSC spoke to Bored Panda about how Sader Issa’s story is quite unusual in the regard that “it is actually quite rare for men with Down Syndrome to have children.” According to the National Down Syndrome Congress, this often has to do not with males being sterile, but with their “lack of knowledge” about reproduction.

“Women with Down Syndrome are able to get pregnant, but it does not happen often.”

The NDSC went into detail about Down Syndrome and those it affects: “People with Down Syndrome are more alike their typical peers than they are different. They take longer to reach milestones when they are young, but they reach them! They have feelings and emotions and they want to be treated with respect.”

“People with DS are living great lives!” the NDSC explained, with regard to how things have changed over the years. “The life expectancy for people with DS has increased from age 25 as recently as the 1980s to being 60 now. People gain meaningful employment and live independently, with many attending college and some getting married.”

Dear Pandas, what is your experience with people who have Down Syndrome? What do you think of the beautiful relationship between Sader and his dad Jad? Share your thoughts and stories with everyone else in the comments? Exquisite 2,000-year-old sapphire ring thought to have belonged to Caligula goes on sale for $750000
We need to be sure you are not a bot. Type the characters you see in the picture below.
Обновить