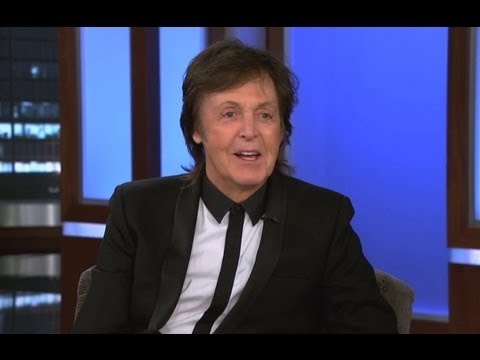 25 sep 2013 16:01
Tags: awesome   celebs   cool   interesting   music   news   style   topics   trending   weird
1062
3
With his ‘New‘ album just around the corner, it’s time for Paul McCartney to start making the publicity rounds, including his first-ever visit to ‘Jimmy Kimmel Live!’
McCartney stopped by Kimmel’s late-night ABC talk show last night and took a few moments to chat about the new record while reminiscing about some of the high points from one of rock’s most successful and storied careers. And speaking of all that success, here’s something fans might find funny: Not only does McCartney still suffer performance anxiety, but he often has nightmares about playing disastrous gigs with the Beatles. (You can watch about 12 minutes of the interview in the videos above and below.)
“You can’t control what goes on in your dreams anyway,” explained McCartney. “I’m there, say, with the Beatles, and we’re playing, and the audience starts to leave. ‘What do we do? What do we do? Quick! ‘Long Tall Sally” — they’re still leaving. You wake up in a cold sweat.”
McCartney also discussed the Beatles’ historic first trip to Hollywood, saying his most prominent memory is of “Lot of screaming — which is, you know, great. Beautiful girls — we were young, we were healthy, we were ready to roll.” The band also met Elvis Presley, which left them starstruck because “we were little kids from Liverpool, growing up hearing this first burst of rock ‘n’ roll, really — we hadn’t heard that kind of stuff, so it was magical. We always wanted to meet him.” The meeting took place despite some interference from Presley’s manager, the infamous Colonel Tom Parker. As McCartney mused during the interview, “I think we were a threat — he was popular, but we were kind of taking over.”
Saying he recorded his ‘New’ LP in “various places — New York, London, L.A.,” McCartney described the somewhat surreal experience of returning to Abbey Road Studios and sitting in traffic at the ever-crowded crosswalk that the Beatles immortalized on the cover of their ‘Abbey Road’ album. “I do have to go across the famous crossing, and of course I have to stop, because they’re all on there, getting their pictures taken,” he said, laughing, “I often think I should just get out [and pose].”

As for whether any unreleased Beatles recordings remain? “Yeah, but you wouldn’t want to hear them,” McCartney assured a doubtful Kimmel. “There’s one or two things, but one that sort of deep fans keep requesting is a thing called ‘Carnival of Lights,’ but it’s very far out. Far out for 15 minutes.”

After his appearance on Kimmel’s show, McCartney played a 15-song set on the roof of a Hollywood Boulevard theater.