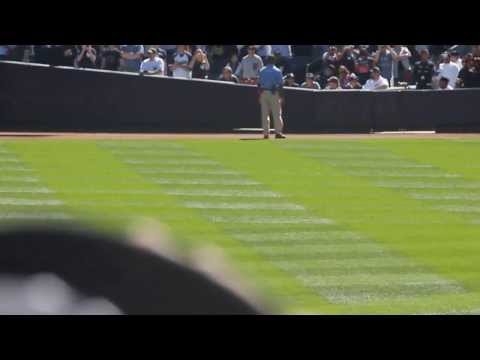 25 sep 2013 16:02
Tags: awesome   celebs   cool   interesting   music   news   style   topics   trending   weird
1060
2
When you head to New York for the weekend, you’d better make the most of your time in the Big Apple. And that’s exactly what the guys in Metallica just did, delivering a blistering set at the legendary Apollo Theater on Sept. 21 before making a surprise appearance at Yankee Stadium the following day.
The band was on hand at Yankee Stadium to help celebrate the career of Mariano Rivera, the intimidating pitcher who’s taken the mound countless times to the strains of Metallica’s ‘Enter Sandman.’ Retiring after a 19-year career in the majors, Rivera might have been playing his final home game with the Yankees, and they made it count with a nearly hour-long ceremony that included appearances from former coaches and teammates, the retiring of his jersey and a live performance of — you guessed it — ‘Enter Sandman.’ You can watch video above.
In addition to the song (which they kicked off by saying “This one’s for you, Mariano”) the band — decked out in special Yankees-style Metallica jerseys — presented Rivera with a giant autographed speaker with Rivera’s No. 42, the name Metallica and ‘Sandman’ on the front. “The whole thing was special, I wasn’t expecting something like that,” Rivera told ESPN. “A lot of emotions. It was more than what I was thinking.”
The Yankees extravaganza came after the band’s 18-song set at the Apollo, which they chronicled with a series of photos at their Facebook* page. Part of Metallica’s promotional tour for the release of their IMAX 3D movie ‘Through the Never,’ the show presented a suitably heavy look back at the group’s storied multi-platinum career.
* Запрещены в РФ