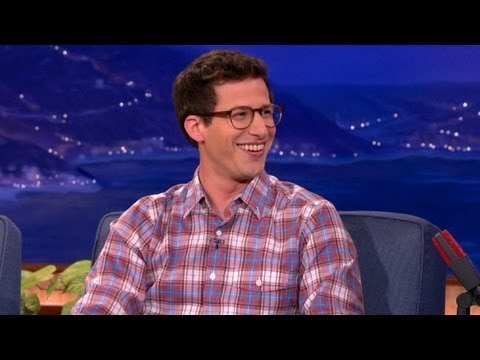 27 sep 2013 20:43
Tags: awesome   celebs   cool   interesting   music   news   style   topics   trending   weird
885
1
I would never subject myself to sitting through ninety minutes of a 21st century Happy Madison production but despite never seeing the film I feel plenty confident in stating that Andy Samberg telling Conan O’Brien the story of how Adam Sandler showed up to his rehearsal dinner in character from That’s My Boy and screaming things like, “Oh, am I f*cking embarrassing you, buddy?” is infinitely better than anything else that has ever had to do with that movie.
I mean, sure, Adam Sandler is essentially putting a hex on the marriage from the very start, but I still enjoy the idea of Sandler not taking himself seriously in mixed company and going all in on the bit.
That part starts around halfway through above, after Samberg recounts the joys of losing his virginity — HAD SEX-style — on his wedding night. And below are some action-comedy acting tips for all you newly found Brooklyn Nine Nine fans.