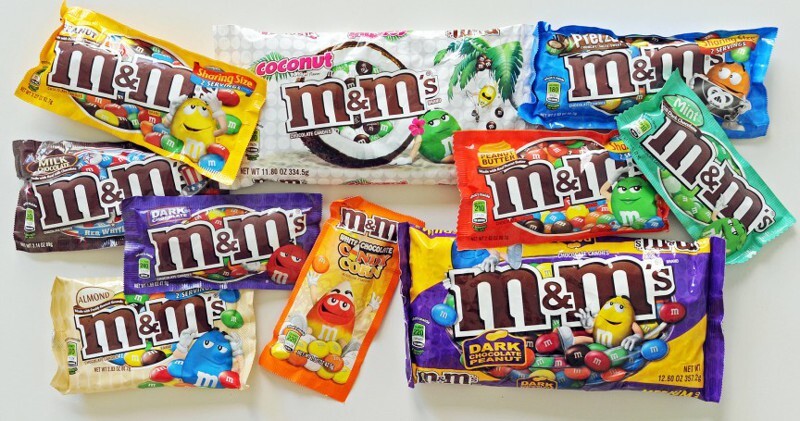 25 sep 2015 13:58
Tags: candy   fact   m&m’s
0
10
1
For decades, people all over the world have enjoyed munching on these button-shaped, chocolate-filled treats with an “m” distinctively printed on each of their candy shells. But what most people don’t realize is just how wildly popular M&M’s really are. Bloomberg actually lists the Mars-produced goodie as “The World’s Best-Selling Candy,” with its sales in 2013 amounting to over half a billion dollars in America alone. And while the usually brown-bagged delight is a permanent fixture in stores located in over 100 countries, a lot is still not widely known about it.
Here are ten M&M’s facts that you probably aren’t aware of: 0
Do the M’s in “M&M’s” represent “Melt in your Mouth”? Well, while the phrase may be part of the product’s famous slogan, the M’s actually represent the surnames of the candy’s founders, Forrest Mars, Sr. and Bruce Murrie, both Americans. Forrest is actually the son of Franc Mars, the founder of the company responsible for producing Milky Way, Snickers, Three Musketeers, and of course, the Mars bars.

As Forrest was working with his father, he wished to expand, but Franc did not, so he eventually opened his own candy business. Then, when Forrest was ready to develop M&M’s, he partnered with Bruce Murrie, the son of William Murrie, an executive at Hershey. Bruce came up with additional capital for the production of M&M’s, while Hershey provided the ingredients and the technology for the candies. Eventually, however, when the war ended in 1945, Forrest bought out Murrie and became the sole owner of the M&M’s brand. Then, when Franc Mars passed away, Forrest took over the family business and merged M&M’s with Mars Inc.

9. Created With Soldiers in Mind

0
An unverified story goes that while Forrest was in England to manufacture Mars bars for United Kingdom troops, he saw several soldiers eating chocolates encased in a hard sugar shell. Forrest was supposedly excited by the idea of a hard-coated chocolate because it would address the problem of chocolates melting in the summer months — the cause for chocolate sales dipping during this season. Whether or not this story is true cannot be ascertained, but what is definite is that M&M’s were developed specifically to be provided to American troops. This deal had been secured by the Hershey company, which Forrest partnered with to make M&M’s. And as Forrest had anticipated, M&M’s turned out to be incredibly popular with soldiers because of the ability of the candies to retain their quality despite varied temperatures and long travels. Then, when the war ended in 1945, M&M’s were made available to the general public — the beginning of introducing the candy brand to the entire world.

Not only is M&M’s among the world’s best-selling candies, it also has attached to it one of the world’s most recognizable and well-liked slogans: Melt in your mouth, not in your hand. In fact, a May 2014 study found that the slogan is the fourth most recalled behind only Burger King’s Have it your way (#3), McDonalds’s I’m lovin’ it (#2), and Nike’s Just do it! (#1). Even more impressively, the same study found the M&M’s slogan to be the most liked among all, beating out What happens in Vegas, stays in Vegas (#3) and The few, the proud, the marines (#2). The reasons provided for why the M&M’s slogan was so well-liked were the clarity of its message, its creativity, and the familiarity of the brand itself. 6. M&M’s Blamed for the Strangest Things 0
Could something as innocent as M&M’s really be blamed for strange-colored honey and even mysterious near-deaths? Apparently, yes. In 2012, beekeepers in France were perplexed when their bees began producing honey in various shades of blue and green. Upon investigating, the beekeepers learned that their bees had been visiting a biogas plant processing M&M’s candy containers that still had the colored residue on them. Eventually, the biogas plant solved the problem by storing the said containers in a covered hall.

Then there’s the case of former Oasis frontman Liam Gallagher who in 2013 entered anaphylactic shock and nearly died after eating a blue peanut-filled M&M. Fortunately, the then 40-year-old singer was successfully treated at a nearby hospital. Of the incident, Gallagher reflected, “I’ve done some stuff over the years, but never… Never did I think a f–ing blue M&M would be the thing that could have killed me.” 0
In 2007, People for the Ethical Treatment of Animals (PETA) called for a boycott of M&M’s-maker Mars Inc. for funding experiments that involved rabbits, mice, rats, and guinea pigs. More specifically, according to a statement from the outspoken animal rights advocate, the candy company was responsible for allowing studies that had rats being “force fed by having plastic tubes shoved down their throats” then being “cut open and killed.” The claim was strengthened when the University of California, San Francisco admitted that it was conducting a Mars-financed experiment that involved testing on rats. Mars responded to the controversy by reiterating a statement on its website that said the company barred animal research “involving euthanasia, vivisection or the suffering of any animal.”

4. Sued by a Naked Cowboy and People With Cracked Teeth 0
M&M’s has had its share of strange lawsuits filed against it. In 2008, for example, Robert “The Naked Cowboy” Burck, who performs songs on his guitar while wearing only cowboy accessories and his underwear, sued Mars for millions of dollars after the company had displayed images featuring an M&M’s mascot with a guitar and tight white shorts. Burck insisted that the advertisements had given the impression that he was endorsing M&M’s, and the two parties eventually ended up quietly settling the case.

Then there were the lawsuits filed by people who claimed that M&M’s cracked their teeth: in 2012 by a male prison inmate in Florida, in 2013 by a Brooklyn housewife, and in 2013 by a man in Chattanooga.

3. Red Was Once Discontinued 0
In the 1970s, the production of red M&M’s was discontinued because Red #2, a particular type of dye, was linked to cancer and banned by the FDA. Actually, M&M’s had never used Red #2, but the company still stopped including red M&M’s in its candies in order to avoid controversy. Fast forward to 1982: Paul Hethmon, a bored college student from Tennessee, decided to have some fun by beginning the Society for the Restoration and Preservation of Red M&M’s. Surprisingly, the supposedly satirical campaign gained widespread attention and support, The Wall Street Journal even interviewing Hethmon. Finally, on January 9, 1987, M&M’s wrote Hethmon to inform him that red M&M’s had been reintroduced. The company even sent him 50 pounds of red M&M’s to commemorate the event. 0
Throughout the history of the space shuttle program, M&M’s, because of the ease with which they can be eaten, have been the most commonly consumed chocolate in outer space. Editor of the space artifacts and history website Robert Pearlman notes, “M&M’s not only serve as foods for the astronauts, but also as entertainment. Astronauts will often release handfuls of them and then catch them with their mouths as the pieces float around.” However, because NASA refuses to endorse commercial services and goods, M&M’s have often been referred to simply as “candy-coated chocolates” ever since they first made their way into space during the Columbia shuttle’s flight on April 12, 1981.

1. Van Halen Required M&M’s Backstage… But With No Brown Ones 0
This one is so unusual that it’s often mistaken as nothing more than an urban legend, but it’s actually 100% real: legendary rock band Van Halen regularly demanded M&M’s to be made available backstage — but with the brown ones excluded. The specific requirement in the band’s standard contract rider for its 1982 world tour was classified under “Munchies” and read: “M&M’S (WARNING: ABSOLUTELY NO BROWN ONES).”

As expected, when the public learned of the strange provision, all sorts of speculations about why such a demand was made (including to have one more reason to cancel a gig or go on a destructive rampage) came up. However, the actual motivation for the stipulation was more practical — the band’s frontman, David Lee Roth, revealed in his autobiography that the bizarre requirement was a means for gauging a producer’s faithfulness to the technical requirements of the band. “If I saw a brown M&M in that bowl… well, line-check the entire production. Guaranteed you’re going to arrive at a technical error. They [the producers] didn’t read the contract.” 15 Truths That Are Actually Stranger Than Fiction