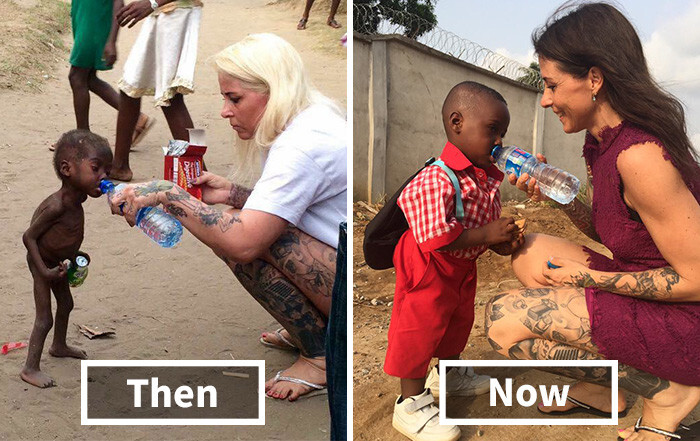 Remember The Starving Kid Left To Die By His Parents? He Just Had His First Day Of School (14 photo)

06 feb 2017 14:14
Tags: kid  recovery  story
600
14
In late January 2016, a Danish aid worker went on a rescue mission on the streets of Nigeria, and discovered a starving child on the edge of death. The moment was captured in a haunting photograph, in which she tilts a water bottle toward the frail young boy’s lips. One year later, the same boy is starting school after a full recovery, and a recreation of his first photo shows just how far he’s come.

Remember the starving, abandoned child found in Nigeria in January 2016?

This is his first day of school, exactly one year after he was rescued by Anja Ringgren Lovén

The boy, named Hope, was left to die by his parents after being accused of ‘witchcraft’

He was taken to the hospital immediately, and was treated for malnutrition and stomach worms

Just 8 months after his discovery, he started to gain weight and regain his energy

Hope made a full recovery, and is barely recognizable from before

But really, who could accuse this face of anything evil?

The orphanage, run by Anja Ringgren Lovén and her team, proved to be a loving home for Hope

Anja works for DINNødhjælp (‘your relief’), a Danish volunteer organisation active in Nigeria

“All children have rights and those rights must be protected, always,” Anja writes on Facebook

−3
Владимир 3 years prev
They are accused him in witchcraft because they are stupit f*uckers who don't know what is a real civilization in casual life. All this thanks to bad economic in their country, because of this the people are don't f*cking know that the demons, devils and witches just doesn't exist! Poor children..
-1
Reply  •  Link  •  Report this  •
Share ›
Show all
Show more (from _) Cat No One Dared To Touch Finally Found A Human Who Hugged Him
We need to be sure you are not a bot. Type the characters you see in the picture below.
Обновить