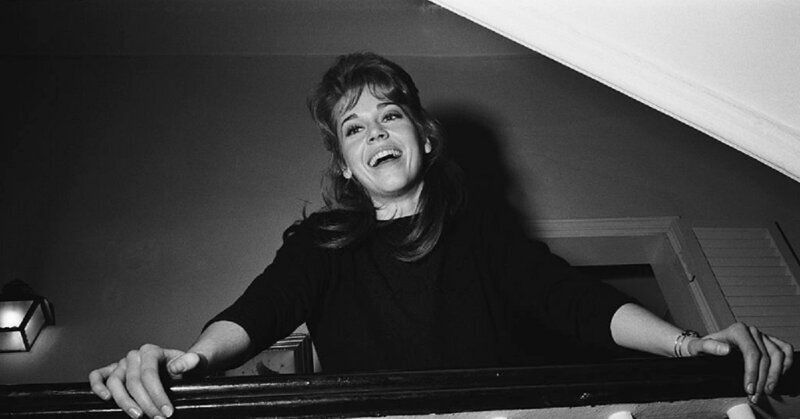 17 feb 2020 14:45
Tags: 1960   actress   jane-fonda   new-york   photography   star   youth
0
24
In 1960, French photographer Paul Slade followed the steps of Jane Fonda, then 22-year-old, around New York City. The young actress at the time was taking the courses at the Actors Studio with Lee Strasberg, and performed in the play There was a Little Girl, directed by Joshua Logan, on Broadway.
Below are 23 fascinating photographs of a young Fonda relaxing in her apartment, taking dance classes, walking on the streets of New York, working at Hicks & Son.

Jane Fonda laughing while leaning at the banister of the stairs in her apartment.

Jane Fonda lying on the sofa with her Siamese cat at her home.

Jane Fonda smiling while lying on the sofa with her Siamese cat at her home.

Jane Fonda preparing the meal in the kitchen at her apartment.

Jane Fonda smiling in her kitchen.

Jane Fonda sitting in the dining room with a friend.

Side view of Jane Fonda sitting at the dinner table at her shared apartment.

Jane Fonda smoking a cigarette at the dinner table.

Jane Fonda preparing a cup of ice-cream for a client at Hicks & Son.

A tired Jane Fonda leaning on the counter at Hicks & Son, where she is working between her classes.

Jane Fonda repeating a text with a friend.

Jane Fonda posing near the entrance to the Cort Theatre.

Jane Fonda posing in front of the poster of her play at the Cort Theatre.

Jane Fonda walking down 48th Street, the Cort Theatre where her play 'There was a Little Girl' is playing.

Jane Fonda trying on a mask in a drugstore.

Jane Fonda, leaning against a pole, smiling while listening to the street musicians playing for her.

Henry Fonda explaing a scene to Jane Fonda during her visit to his apartment.

Jane Fonda during a visit to her father, Henry Fonda. I Photographed Transylvanian Elders Who Preserve Centuries-Old Traditions And Habits 14 Portraits That Depict Kids From Around The World As Astronauts