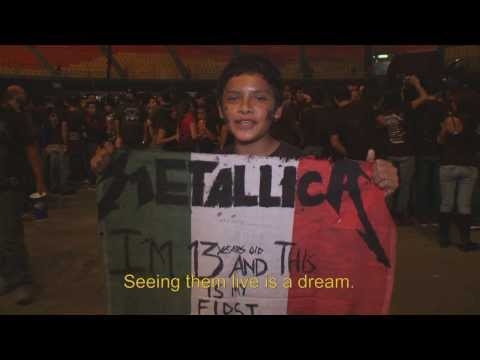 Watch an Exclusive Metallica 'Through the Never' Featurette (1 video)

30 sep 2013 12:44
Tags: cute   heartwarming   interesting   news   sweet   trending
4120
1
Metallica release their long-awaited 3D concert film ‘Metallica Through the Never’ at IMAX theaters nationwide today, with the movie arriving in regular theaters a week later. We’re partnering with our sister sites Loudwire, Noisecreep and ScreenCrush to bring you this exclusive behind-the-scenes featurette.
‘Hit the Lights: The Making of ‘Metallica Through the Never’ – Chapter 8: The Fans’ chronicles the band’s shows at the Palacio del los Deportes in Mexico City in the summer of 2012 that played to 170,000 people over eight nights. The dates served as a dress rehearsal for the concert that was filmed for the movie, which was performed at the Rogers Arena in Vancouver, British Columbia, Canada, on Aug. 24, 2012.
The nearly six-minute clip shows the depth of Metallica’s Mexican fan base, which includes a duo that’s traveled all across Latin America to see them and Mexican wrestler Axel “Nieto del Santo,” who shows up in full luchador regalia. You see the band meeting fans backstage and bassist Robert Trujillo describing the sheer force of the crowd’s enthusiasm from the moment they began the first concert.
“IMAX! It doesn’t get bigger or cooler than that!” Lars Ulrich said about the movie in a press release. “For four guys in a rock band of average height, to get a chance to unleash their 3D film on IMAX screens the size of buildings across the country is a mind-blowing thought. ‘Hey look, Mom, I’m 50 feet tall (finally!)’ There is no better way to experience film and when you throw in the spectacle of music and sound this should amount to an unprecedented, unique and truly next level experience.”