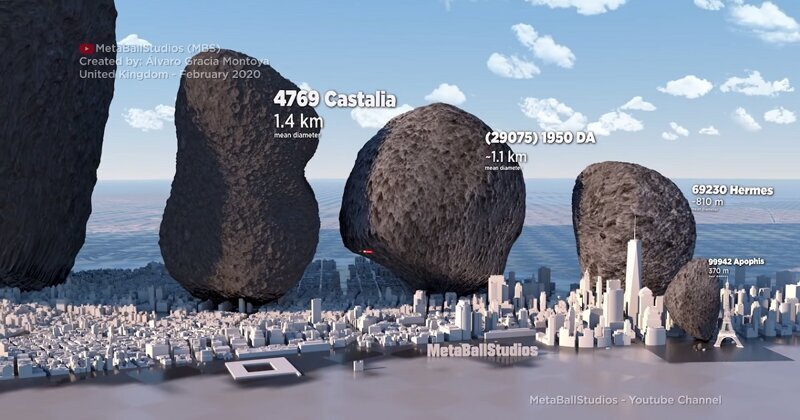 27 feb 2020 13:55
Tags: Solar System   alvaro-gracia-montoya   asteroid   comparison   new-york   size
0
8
1
The multiverse is infinite, space is huge, and the stuff floating about in it is pretty darn big as well. But just how big are we talking about? 3D animator Alvaro Gracia Montoya of MetaBall Studios showed us just how big some asteroids in our Solar System really are. And he compared them to the size of New York City, so we can wrap our heads around the concept As it turns out, the asteroids in our Solar System are huge! “My channel is specialized in size comparison. I saw that there were almost no videos about asteroids, so I thought it would be a good idea to make one,” the animator told Bored Panda.

“The project took almost a month to complete,” he revealed how long he had to work on the clip.

We were interested to know whether Alvaro thought that Planet Earth is threatened by asteroids. According to him, we have enough problems already and shouldn’t be worrying about asteroids. However, he did point out that it’s important to keep in mind that some asteroids might be dangerous in the future, in which case it’s vital to make sure they don’t collide with Earth.

“Although some are very large, the most dangerous are the small ones because they are more difficult to detect,” he said.

Finally, we asked Alvaro whether he always wanted to be a 3D animator: “I have always liked making videos on YouTube, especially animations, but I never knew it, I discovered animation along the way.”

He added that new 3D animators should follow their hearts and do what they like best: “This way, it will be easier.”

This isn’t the first time that Alvaro the artist has grappled with the cosmos. Previously, he created an awesome animation comparing the sizes of the planets, moons, and other celestial objects found in our Solar System.